Sometimes golf doesn't go your way. But for defending Masters champion Sergio Garcia, things went rapidly from good to to very, very bad in the first round on Thursday. Here's the breakdown of Garcia's nightmare 15th. 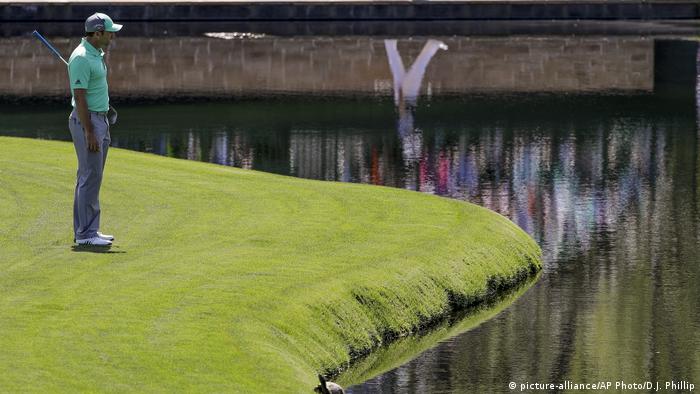 Sergio Garcia didn't know what to say after hitting five balls into the water on the 15th hole of the 2018 Masters. "I don't know what to tell you," said the defending champion, who finished with a record-breaking nine-over par round of 81.

His effort at the 15th was the joint-worst hole in the history of the Masters and the first time in the entirety of the 84-year competition that someone has taken 13 shots on the par-five 15th. On the hole that turned out to be the second easiest in this Masters round, here is a look at how Garcia went from two-over par to second last on the leaderboard.

Garcia hits a huge shot off the tee, ending up 322 yards down the fairway, slightly left of center. It's a great start. Garcia is ready to get back to par, maybe even under par, and lay down a marker for that title defense.

The Spaniard lofts a smart-looking shot onto the green. All is well. Hold on. What's this? The spin starts bringing the ball back. "If it carries two more feet, it's probably good," Garcia said afterwards. But it didn't and once the ball hit the slope at the front of the green, the water was always going to gobble it up.

This one is far too short and almost as soon as it lands on the front edge of the green it looks doomed. It rolls off into the water like a swimmer desperate for a dip on a summer's day. Garcia must have felt like joining it at this point.

It's like Groundhog Day. Garcia hits the ball beyond the pin, but the spin brings it back underneath and towards the dreaded slope. For a moment it looks like it might stop, but then it catches the hill and speeds through the rough to end in the drink. Garcia can't believe it. No one can.

Garcia goes again, lofting it slightly right of the pin this time. But it's not far enough beyond and, even more agonizingly than before, the ball flirts with the idea of stopping, brushing up against the grass before deciding against it and quickly burrowing downhill and into the wet stuff. The crowd starts to feel awkward. Is this really happening?

At this stage, Garcia has to try something different. But from the moment he hits it, he knows it's off. Holding the club over one shoulder, posture crumbling, Garcia watches on as his attempt to slice it low and hard hits the right edge of the green and flies back across the smooth surface, drawn to the water as if there's a ball magnet hidden in the shallows. At this point, we're all thinking: players tend to only carry six golf balls when out on the course.

This time Garcia gets a hold of it and sends it way beyond the hole (understandably really at this stage). As soon as he hits it, Garcia is walking. It's good. But it starts to spin back again, perhaps just so accustomed to shots before. Garcia stops. Surely not? Mercifully it stays on the green. The crowd cheers in what sounds mostly like relief.

On the 16th, Garcia birdie. Golf. Who would try it?