Serbian nationalist politician Vojislav Seselj once narrowly avoided a guilty verdict for crimes against humanity. Would he return to The Hague should judges overturn that verdict on Wednesday? 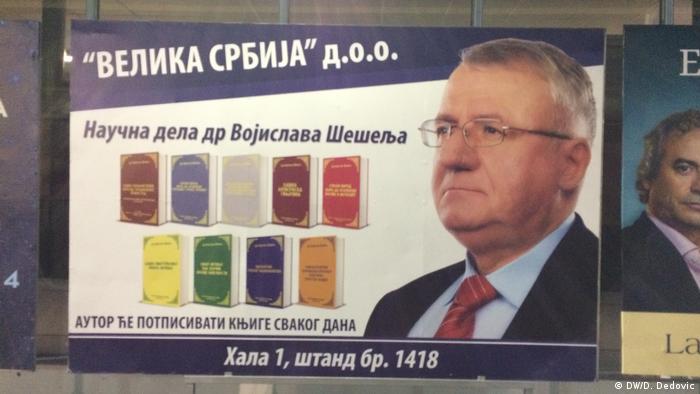 It should come as no surprise that Vojislav Seselj, the former head of the far-right Serbian Radical Party (SRS), has no desire to return to The Hague. He already spent more than a decade there between 2003 and 2014 as a defendant in a war crimes trial before the International Criminal Tribunal for the former Yugoslavia (ICTY). He was standing trial for — among other things — crimes against humanity.

Prior to the Orthodox Easter holiday, Seselj could be seen in a number of television studios in Serbia's capital, Belgrade. The hard-line nationalist appears to have softened with age. He seemed almost stuffy seated next to folk music starlets and celebrated athletes.

But appearances can be deceiving: Seselj simply lacks any real enemies anymore.

Seselj made a miraculous recovery from cancer after being granted provisional release following 11 years on trial in 2014. Since then, he has burned Croatia's flag in public, threatened Kosovo Albanians with the use of weapons and led his party back into parliament.

During the heated battles of the 2016 parliamentary and 2017 presidential elections, Seselj never directly engaged the strongman president, Aleksandar Vucic, a protege-cum-rival who in 2008 founded the Serbian Progressive Party (SNS), which governs the country today. Instead, Seselj aimed his brutal verbal attacks at fellow members of the opposition. Serbia's opposition is weak, Vucic is strong, and Seselj is behaving himself — from the president's perspective, that must be an ideal state of equilibrium.

That, however, could change on Wednesday, should judges in The Hague agree with the prosecution's calls to overturn the acquittal of Seselj that was handed down by the International Criminal Tribune for the Former Yugoslavia  (ICTY), the court of first instance, in March 2016. If judges do overturn the lower court's ruling, Seselj could face up to 28 years in prison. Prosecutors say a retrial would also be an acceptable alternative.

Serbia would be officially obliged to extradite Seselj should The Hague request it. Yet, he has made it exceedingly clear that he will not return voluntarily. Images of Seselj's potential arrest and extradition could turn out to be politically explosive for President Vucic, who keeps an extremely close eye on opinion polls and attempts to control all reporting about himself in tabloids and mainstream media. He has absolutely no interest in being portrayed in a negative light in the eyes of his base — many of whom have been admirers of Seselj. Vucic knows he would be accused of patricide and treason if he extradited Seselj.

That is also why Vucic, despite his pro-EU rhetoric, has refused to extradite two of Seselj's loyal party soldiers. The two men have outstanding ICTY arrest warrants for witness intimidation. It is hard to imagine that two supporting figures in this play would be protected but the main protagonist sacrificed.

Many observers see Seselj's acquittal in 2016 as the absurd finale to a farcical trial. Even if Seselj were to be sentenced to 17 years, for instance, he would have already served more than two-thirds of that time behind bars and could therefore submit a request for early release. Anything less than 17 years would essentially uphold the original acquittal.

On the other hand, anything more, especially a retrial, would present Serbia with a real political challenge. It also wouldn't guarantee that Seselj would ultimately appear in The Hague. The political price that Vucic would pay for not extraditing Seselj would have to be notably costlier than that of delivering him. Though, if the president is still considered a stabilizer in the European Union's effort to limit the transit of displaced people via the Balkans, EU leaders would not want to unnecessarily push him closer to Russian President Vladimir Putin.

No matter what the final verdict is, it will not provide satisfaction to the victims of the hate that Vojislav Seselj has been preaching for years. The efforts to resolve the trials for the atrocities committed as Yugoslavia disintegrated have gone on for far too long and proved far too inconsistent.