An explosion has rocked the southern outskirts of Belgrade, sending a plume of cloud into the sky. At least two people were killed and over a dozen more were injured. A series of explosions ripped through the munitions factory in the outskirts of Belgrade, killing at least two people

Several explosions tore through a munitions factory on the outskirts of the Serbian capital, Belgrade, on Tuesday, killing at least two people and injuring at least 16, police said.

The deadly blast took place at a factory that produces several kinds of munitions, including turbojets and rocket engines, according to officials.

Fire services received a call about the first explosion in a rocket fuel production factory 13 kilometers (8 miles) south of Belgrade at around 2 p.m. local time (1300 GMT).

The building where the explosions took place stored 500 rockets, with each of them containing around 30 kilograms (66 pounds) of explosives, according to a police statement. 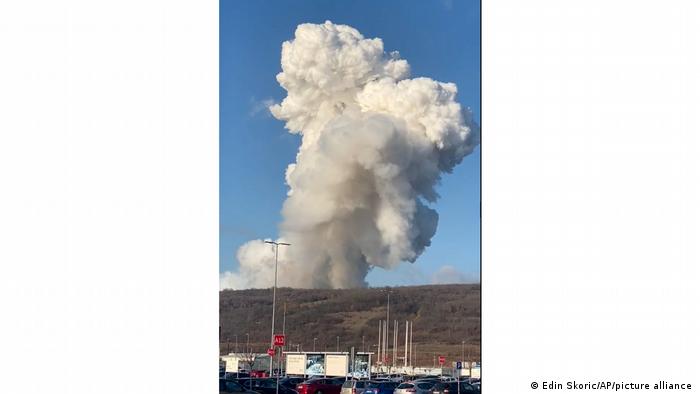 Fire services chief Milos Majstorovic said rescue crews were searching the area to see if there were any more injured people.

Some 40 people were inside the warehouse at the time of the blast, state television RTS reported.

The injured workers have been transferred to hospitals in Belgrade with severe burns, while others remain unaccounted for, RTS said. The broadcaster added that the warehouse was completely destroyed, leaving a crater in the ground.

Police said the blaze has been localized and residents in the area are safe.