Serbia and Kosovo reach deal to end mutual trade embargo | Europe | News and current affairs from around the continent | DW | 02.09.2011

A mutual trade embargo between Serbia and Kosovo has been lifted, paving the way for goods to flow freely through the two countries. The EU, which mediated the talks, says the deal makes the region look more European. 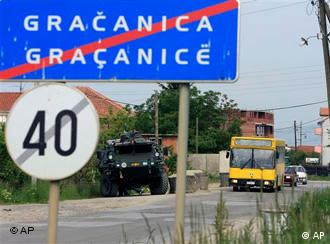 Serbia and its former province Kosovo on Friday reached an agreement to end a mutual trade embargo during European Union-mediated talks in Brussels.

The EU described the agreement, under which the two sides will allow products from each other's territories to pass freely, as an important step towards improving bilateral relations.

The agreement is to come into effect within the next week.

The EU had suspended the talks back in July after Belgrade refused to accept a Kosovo customs seal. Friday's compromise will see Kosovo officials mark goods with a stamp that simply says "Kosovo customs," with no national coat of arms or flag.

Serbia had refused to accept a stamp with Kosovo's national symbols, fearing this would be interpreted as the de facto recognition of what it still sees as a renegade province. 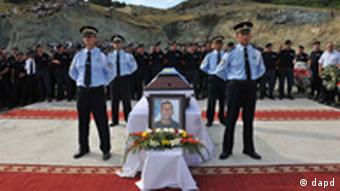 Violence near the border in July killed one ethnic Albanian

The head of the Serbian delegation, Borislav Stefanovic, said the agreement applied only to the transit of people and goods but not to the status of the border crossings in the north of Kosovo.

The Jarinje and Brnjak border posts have been controlled by German and Austrian peacekeepers since shortly after the July talks broke down.

Belgrade banned the import of goods from Kosovo shortly after it declared independence from Serbia in 2008. In June, Kosovo retaliated by imposing a ban on the import of Serbian goods and sent security forces to take control of the country's border posts in the mainly Serb north of the country. Clashes with local Serbs earlier this summer resulted in the death of one ethnic Albanian before the NATO troops took control of the crossings.

During Friday's sixth round of talks, which are meant to resolve practical, day-to-day issues, the two sides also reached an agreement on sharing property records, as well as discussing telecommunications, energy and university diplomas.

Serbia refuses to compromise on Kosovo despite German pressure

Serbia has once again vowed never to recognize Kosovo's independence, despite German Chancellor Angela Merkel's warning on Tuesday that Belgrade's rift with Pristina could threaten Serbia's bid to join the EU. (26.08.2011)

On a visit to Kosovo, German Foreign Minister Guido Westerwelle has urged both Pristina and Belgrade to settle their border crisis. He said all of Europe had an interest in a peaceful solution. (11.08.2011)

Roadblocks removed as tense calm settles in at Serb-Kosovo border

Serb officials in northern Kosovo have agreed to remove roadblocks as per a NATO-brokered deal between Pristina and Belgrade. However, the deal doesn't necessarily represent warmer relations between the two sides. (08.08.2011)