The Kosovo Serb minority party says it will withdraw from the Kosovo government after the dramatic arrest of a senior Serb politician. The move could spell the end of Prime Minister Ramush Haradinaj's term in office. 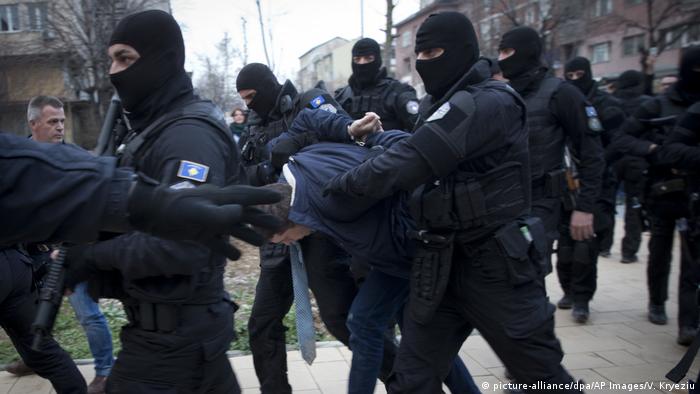 "The Serb List will withdraw from the government and Kosovar institutions," Rakic told journalists at a press conference.

The decision comes a day after heavily armed Kosovar police detained senior Serb politician Marko Djuric in Mitrovica, a volatile, mostly Serb city in northern Kosovo. Djuric, who is also Belgrade's chief negotiator for Kosovo, had ignored a Kosovo entry ban and was deported shortly after his arrest. The events have sent tensions between Pristina and Belgrade soaring.

The Serb List has four ministers in the current government in Pristina, which was formed following snap elections in 2017. It also has 10 deputies in the Kosovar Parliament.

Without the Serbs in the coalition, Prime Minister Ramush Haradinaj of the Alliance for the Future of Kosovo has no majority in parliament. It's now unclear whether he will seek new allies or be forced into another election.

The Republic of Kosovo unilaterally declared independence from Serbia in 2008, but Serbia still claims it as part of its own sovereign territory. In 2013, the two states agreed to normalize ties through talks mediated by the European Union.

Read more: Clocks in Europe are running late because of the Kosovo conflict

The EU's top diplomat, Federica Mogherini, was due to travel to Belgrade on Tuesday to discuss the future of Serbia-Kosovo talks.

The Kosovo minister for communities and return, Dalibor Jevtic, who is also from the Serb List, said the decision to quit government was "unanimous."

He said Djuric's arrest was the "straw that broke the camel's back."

"There needs to be responsibility taken for the excessive use of force and for everything that happened yesterday," he said. "We will no longer support the government's initiatives in the Kosovar Parliament."

He added that the "objective of the Serbian population is peace."

German Foreign Minister Sigmar Gabriel has voiced his support for Serbia's membership in the European Union, but not before it accepts Kosovo's independence. Five EU member states have also yet to recognize Kosovo. (15.02.2018)