Security Topped Agenda at Iraq-Jordan Meeting | World | Breaking news and perspectives from around the globe | DW | 12.08.2008

Jordan's King Abdullah has returned from Baghdad, where he called for an end to sectarian fighting. Abdullah was the first Arab head of state to visit Iraq since the 2003 US-led invasion. 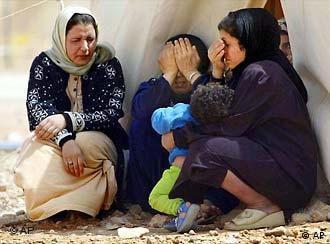 Jordan has taken on many Iraqi refugees

Abdullah spent most of Monday, Aug. 11, in meetings with top Iraqi officials. Iraq's Prime Minister Nuri al-Maliki hailed the visit, saying it was an important step in Iraq's attempt to normalize relations with its neighbor.

The visit opened a new page in relations between the two countries which will help to maintain the stability and security in Iraq and all the region, al-Maliki said.

Jordan hosts about 500,000 Iraqi refugees who have fled violence in their war-torn country, and Amman has estimated the costs of sheltering them so far at more than 1.3 billion euros ($2 billion).

DW-WORLD.DE spoke with Middle East expert Kamal Sido about the fate of the Christian minority in Iraq after EU ministers this week dropped calls to take in more Iraqi refugees. (26.07.2008)

Iraqi refugees living in Jordan denounced Friday, July 25 a move by Germany to postpone until September efforts to look into their case for asylum in the European Union. (25.07.2008)