India's biometric identification system, which contains personal data of over a billion Indians, is in the eye of a storm - amid growing concerns over privacy, security and legality. Murali Krishnan reports. 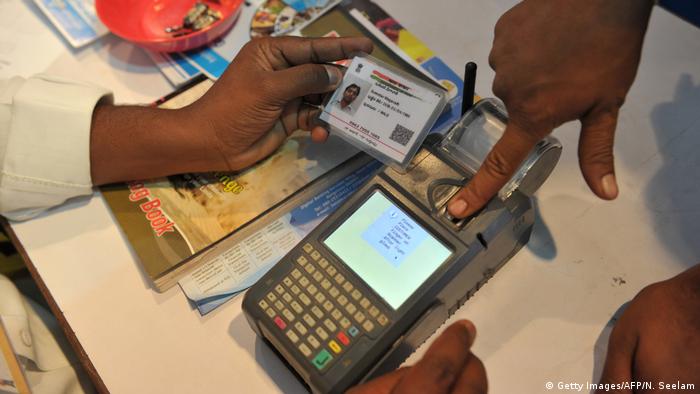 When the personal details of India's cricketing icon Mahendra Singh Dhoni went public on social media a couple of months ago, the leak raised the issue of privacy of individuals and security of data collected by the Indian government for the Aadhaar database - which contains the biometric data of over a billion Indians.

The ambitious project is being managed by the Unique Identity Authority of India, which enrolls residents, stores and manages their biometric data, and issues the 12-digit Aadhaar numbers.

The project was introduced roughly a decade ago by the then Congress party-led government in the hope that it would help ensure targeted delivery of government subsidies, benefits and services.

And the current BJP-led government under Prime Minister Narendra Modi has been seeking to vastly expand its usage, despite instances of security weaknesses resulting in the leak of personal data of children and cases of private entities illegally storing biometrics data.

The World Bank has praised India as a global IT powerhouse, but has warned a huge majority of the nation's population remains locked out of the benefits of the digital economy. Internet access was crucial, it said. (10.05.2016)

Can technology be used to fight for women's right to free maternal health services? Mera Swasthya Mei Aawaz is a data-driven project that gives poor women in India the chance to actively monitor and record corruption. (23.09.2016)

The Modi administration's push also violates a Supreme Court ruling issued in October 2015, stating that the Universal Identification Document, commonly known as Aadhaar, cannot be made mandatory for any government scheme. The government says more than 90 percent of residents now have an Aadhaar number.

It argues that linking social welfare schemes to Aadhaar will eliminate bogus beneficiaries and ensure transparent and efficient payouts. It has set a June 30 deadline for workers to enroll or show proof they have applied.

Activists, however, are increasingly worried.

"It is a clear invasion of privacy. It is nothing but an attempt by technocrats to turn everyone into a customer for their financial technology-related products," Usha Ramanathan, an independent legal researcher and campaigner against Aadhaar, told DW.

"The government has been in a haste to enforce Aadhaar and link it to both welfare and non-welfare schemes in the country. But, it is a serious concern when personal information of an individual is not kept protected and gets leaked out in the public field," Gopal Krishna of the Citizens Forum for Civil Liberties told DW.

Aadhaar, which collects among other information, citizens' iris scans and fingerprints and stores them in a centralized database for an extended time with only loose guidelines and no pre-existing laws to ensure the privacy of that data, is now linked to no less than 38 government schemes, including the government's latest directive.

Now, the government says it needs to link the identity number to income tax returns to improve compliance and prevent fraud.

"If the government misled the public to no end on this subject, can we trust it not to misuse the formidable powers of Aadhaar?" said Jean Drèze, a development economist and visiting professor at the Department of Economics, Ranchi University. "Soon it will be virtually impossible to live in India without Aadhaar. And if you cannot live without Aadhaar, in what sense is it voluntary? As a columnist aptly put it, Aadhaar must be 'the biggest bait-and-switch in history,'" Drèze told DW.

Despite criticism from many quarters, ministers and officials remain steadfast in their push to expand its coverage and usage. Last month, Finance Minister Arun Jaitely unequivocally said that Aadhaar may become the only card required to identify a person in India, replacing other documents such as a voter identification card and a permanent account number.

"A stage may come when unique identity card (Aadhaar) may become the sole card. There are many countries where such a situation exists. There is a social security number in the US and in India it (Aadhaar) could be the counterpart," he said.

The man behind the Aadhaar scheme, Nandan Nilekani, has defended the project in the face of fierce criticism, saying there's nothing wrong in the government's decision to expand the scheme's use.

"There are enough checks and balances to ensure it is not misused," says Nilekani.

"I have no evidence at all that Aadhaar was made for surveillance, and I've been in the government. The law is very clear - it states that your biometrics can't be shared under any circumstances, not even for national security. It's a very tight law."