A former secretary to Nazi propaganda minister Joseph Goebbels has died, aged 106. Brunhilde Pomsel was one of the last remaining people who knew members of the Nazi leadership in person.

Brunhilde Pomsel is 105 years old. Many decades ago, she was Nazi Propaganda Minister Joseph Goebbels' personal stenographer. She agreed to be interviewed for the film "A German Life." (01.07.2016)

A critical edition of Hitler's notorious manifesto was published a year ago - and became a bestseller in Germany. Historian Peter Longerich discusses the strengths and weaknesses of the globally publicized work. (11.01.2017)

Brunhilde Pomsel's death was confirmed by Christian Krönes, the director and producer of a documentary film featuring the centenarian. Krönes said that Pomsel had been coherent when he last spoke to her on her birthday, January 11, and added that she had died in her sleep at her Munich home on January 27.

In the documentary "A German Life," Pomsel talks about the years that she spent working for Joseph Goebbels, who was in charge of spreading Adolf Hitler's ideology in newspapers and broadcasts as the Third Reich's official Minister of Propaganda. Pomsel accompanied the propaganda minister for three years - almost up to the point of his death.

Goebbels and his wife Magda famously poisoned their six children before committing suicide on May 1, 1945, which Pomsel recalled in an interview in 2011:

"I will never forgive Goebbels for what he did to the world or for the fact that he murdered his innocent children," Pomsel said about the events. 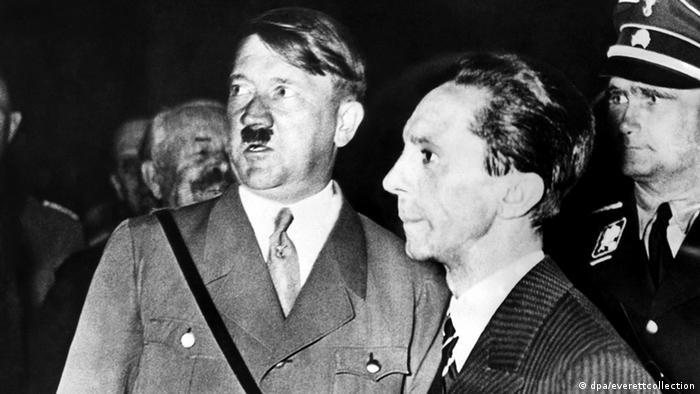 Joseph Goebbels was one of Hitler's most loyal advisors

A life in obscurity

In the years preceding her job as Goebbels' secretary Brunhilde Pomsel was employed in the news division of the German government broadcasting corporation for nine years, which required her to join the Nazi party.

After the war, she returned to broadcasting, working for national broadcasters in West Germany until reaching retirement. She never married or had children.

Pomsel spent most of her life after World War II living in relative obscurity until a German newspaper published an interview with her in 2011. The feature prompted a great deal of interest in one of the last surviving members of the Nazi leadership's inner circle, eventually leading to the production of the documentary on her life.