Police have scuffled with 1,000 left-wing marchers recalling the murder 102 years ago of communist icons Rosa Luxemburg and Karl Liebknecht. 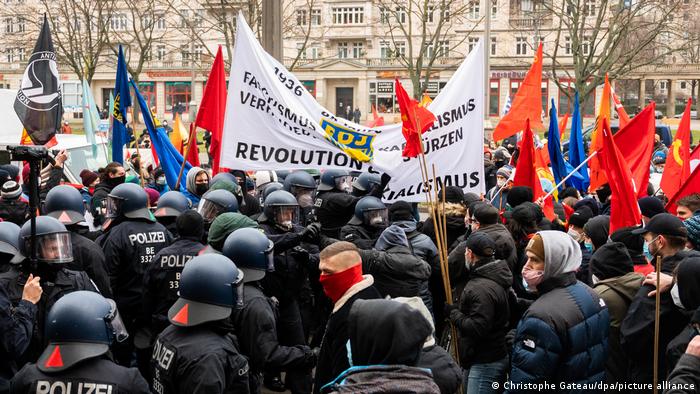 About 1,000 marchers turned up despite the coronavirus pandemic

Berlin police clashed with left-wing protesters on Sunday, who were marching in memory of communist icons Rosa Luxemburg and Karl Liebknecht who were murdered 102 years ago.

Scuffles broke out, a few crackers were ignited, and an undisclosed number of arrests were made, reported rbb, the Berlin region's public broadcaster.

Taking part, despite coronavirus constraints, were some 1,000 demonstrators, many wearing masks, who displayed flags of the German DKP communist party, the radical leftist Antifa, and Kurdish and Turkish organizations.

Their destination was a cemetery in Berlin's Lichtenberg district, where an official commemoration, normally hosted by Germany's opposition Left party, had been postponed until March, with the Left citing Berlin's "very critical corona situation."

Amid revolutionary unrest, Germany voted four days later, with women included for the first time, leading to talks that forged the Weimar Republic, led by Ebert as president until his death in 1925.

The republic, credited with laying democratic groundworks, was eventually eroded during the Great Depression until Hitler's power seizure in 1933.

The 1919 murders of both founding German communists, already estranged from the center-left SPD during World War One, contributed to lasting splits on Germany's left, echoed also in Cold War divisions between east and west.

Deutsche Bahn to spend €12.7 billion on infrastructure and digitalization 5h ago