Former US National Security Advisor Brent Scowcroft tells DW the Obama administration should get more involved in the Middle East. The situation could hardly be much worse than it is now, he says. 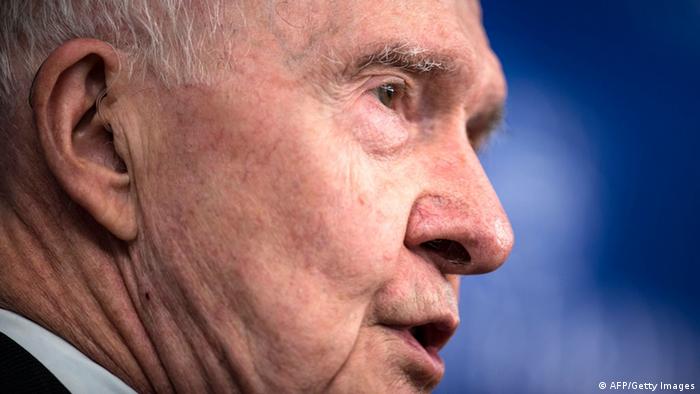 DW: General Scowcroft, the conflict between Israel and the Palestinians is escalating. Israel has initiated a ground operation. This could be the beginning of an invasion of the Gaza Strip. How do you see this development?

It's in a sense a return to a previous conflict. I wouldn't say "the Palestinians." I would use “Hamas" because Hamas and the Palestinians haven't gotten back together again. They are still separate entities.

And what puzzles me is why Hamas is doing this, and what it hopes to gain by it. Because this is certainly bringing tragedy to the whole of the Gaza. It's not clear to me what its objective is. They've turned down requests from Egypt to abjudicate the issue.

What could be the long-term aim of Hamas?

Well, if you want to take Hamas at its words, its long-term objective is the destruction of Israel. But that's not a practical or realistic goal, even for them.

It's not clear to me what started this. Hamas' justifiable objective would be to let Gaza live as an independent entity. They don't have access to anything without the permission of the Israelis or the Egyptians. So they literally can't live there without them.

What impact will a ground operation by Israeli forces have on this conflict?

The Israelis can march through the Gaza Strip, there is no question about it. But then what? For Israeli troops to occupy the Gaza Strip would be a serious problem for them. They are doing okay in the Palestinian territories because they are not in active conflict, and the Palestinians have taken over local security in most of the areas quite thoroughly and quite effectively - in the West Bank.

To what extent will this new situation affect Israel's neighbors?

It is likely to increase the hostility of Israel's neighbors, although it's hard to make it much worse than it is right now. I don't know if it fundamentally changes the possibility of an agreement on the West Bank. But that does not seem very likely anyway despite the secretary of state's efforts.

So how should Secretary of State John Kerry react to this new level of escalation?

We ought to urge a ceasefire. Whatever the situation, this is a dreadful thing to have happen. We should encourage and support Egypt strongly because Egypt at least can prevent any new missiles being acquired by Hamas.

Do you think that Kerry's failed peace initiative is partially responsible for the current crisis?

No, I don't really think so. The current crisis is associated more with what's happening in Syria, and possibly in Iraq. Because that's where the conflict is, and that's the source of the radicals that are spreading through the region. And that's my assumption, but not much has changed in Gaza for this to happen. So what the actual reasons are, I don't know.

So your assumption would be that Hamas could feel encouraged by the conflicts in Syria and Iraq?

Yes, but I don't know encouraged to do what? It's not clear to me what they hope to obtain by firing missiles into Israel. But the Iron Dome missile defense has proved quite effective. They're certainly not going to destroy Israel.

What would be the best move for the US now?

We ought to encourage a ceasefire, and then the US should get behind John Kerry and urge negotiations between the Palestinians and Israelis.

Pretty much everybody has known what the solution is - it is four elements: borders, refugees, two Jerusalems, and security arrangements for Israel. If the US came out and said: "We believe that would represent a just and honorable peace" and we urged it on both sides, that would make a big difference.

You said the US should get behind John Kerry. Do you think he lacked support in the past, and this is one of the reasons why he failed?

He has urged peace, but he hasn't had anything new to put on the table. I'm very pessimistic about Israel and the Palestinians being able by themselves to come to a conclusion. There are just too many negative elements on both sides so that they need something like the American president saying "Do this!"

So you would recommend that the president himself become more active?

Yes, it would take the president himself. The Bush administration made a lot of progress, but the president never put himself out in front.

What should President Obama do? Should he travel to Tel Aviv?

No, he does not need to travel. The first thing that needs to be done, of course, is to stop the current hostilities. Then negotiations would be more possible because Hamas and the rest of the Palestinians have closed ranks. Psychologically, there is nothing that could have a bigger impact than the American president starting to act and urging a solution.

So you think that because he failed to do that in the past, the Kerry peace plan was not successful?

Kerry has only taken the initial steps. But that hasn't been enough up to now. It takes something new, and to me, that something new is the president of the United States saying, "This is good - do it!"

But some people said the US should stop trying to broker peace. Maybe the President also thinks like this: leave it to others, or approach the problem multilaterally. What would be your response to these people?

The Palestinian peace process is partly symbolic. Psychologically it could change the whole atmosphere of the region. And therefore, if you just let it go on for another 50 years, it is very dangerous.

To me, one of the most difficult things would be if the Palestinians finally said: "No, we don't want a two-state solution. We want a one-state solution." That's an impossibility to the Israelis.

So it needs to be done. Syria is a terrible problem, Iraq is a growing problem, there are plenty of problems. But if you can make progress anywhere, we ought to try.

In his foreign policy speech at West Point, President Obama did not focus on the Israeli-Palestinian conflict. Was this a major mistake?

I think it was. Some people will say, "Well, there are all these wars going on, why worry about this one?" It's been there for 50 years. I think it would so change the general atmosphere in the region that it would help in the current problems as well.

So do you think the US is still a decisive and influential nation when it comes to the Middle East, or has it lost influence there under the Obama administration?

First of all, there is the Syrian conflict, where the president has made a few gestures, but nothing decisive. Now, there is Iraq falling apart, and there is Libya, which started out well, but turned into a disaster because there's been no follow-up. For all practical purposes, there is no government in Libya.

So what's missing - a general US strategy for this region? And how should it look in your view?

I don't know whether a general strategy for the region is possible. The Middle East is atomized in terms of its religious and ethnic groupings, and this makes any resolution much harder.

Generally speaking, should the president show more resolve in his actions?

Yes. The president has an interesting way of expressing himself. He is a good communicator and he likes to emphasize dramatic issues in his speeches.

If you look at the Middle East, his first speech was about Egypt: "Mubarak must go!" Well, Mubarak was going to go anyway. By saying that, he put himself on the side of it.

Then Syria: "Bashar Assad must go!" Then there was: "If Bashar Assad were to use chemical weapons, that would be a red line!" Obama has never followed up, and that has given us a lot of difficulty.

What about Iraq? A country that is falling apart - and this maybe as a result of American policy? Should the US step out of the conflict, or should it become more involved, and if so, in what way?

We still could help in Iraq. I don't know if it's possible, but if we could do something that would assist them in setting up a new government, and protect that government from the ISIS forces, which are pretty disorganized. But we can't do much about them without a few more people to identify targets and so on.

Should Obama cooperate with Iran in this case?

I don't know if it's even possible. But I think cooperation with Iran, beginning with their nuclear program, would be a brilliant stroke. Iran used to be our favorite country in the region when the Shah was heading it. If we were able to make progress with Iran, it could be the beginning of unraveling the Sunni-Shia conflict, and getting Arabs to live together again.

Despite six months of negotiations, it seems unlikely that Iran and the major powers will complete an agreement limiting Iran's nuclear program. Should the US extend the talks for another six months?

Yes, I think so. This is very difficult. You can't make an agreement here that is acceptable to both sides without some ambiguities, or without taking some risks. And the question is, what's the size of those risks, and how likely are they to come to reality. We don't know that. Neither side does.

Extending it so we can talk longer - I'd encourage it because the situation now in Iran is very different than it was after the last elections when Mahmoud Ahmadinejad was the president. The mullahs who really run the country are giving much more freedom to act with the government. So I'm modestly optimistic.

Brent Scowcroft is a renowned security expert and served as National Security Advisor in the Gerald Ford and George H.W. Bush administrations.

Industry is closely watching the nuclear negotiations taking place between world powers and Iran. A deal could lead to an easing of sanctions. Both German and foreign businesses see good economic opportunities. (18.07.2014)

With the invasion of Gaza, the eyes of the world, and social media forums in particular, are closely watching the conflict and Israeli Prime Minister Benjamin Netanyahu. (18.07.2014)

As the conflict between Israelis and Palestinians continues to escalate, there also increasingly tensions behind the scenes within Prime Minister Benjamin Netanyahu's cabinet between hardliners and moderates. (18.07.2014)