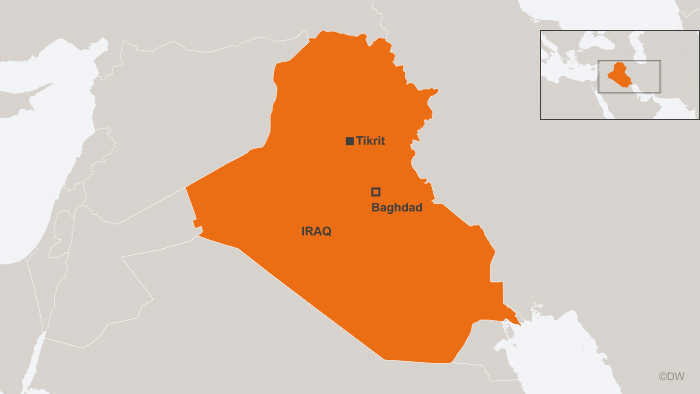 Iraqi elite forces have continued to gain ground against "Islamic State" (IS) militants in the west of Mosul, retaking a government complex. IS also suffered losses to Syrian alliance forces in Raqqa. (07.03.2017)

Iraqi forces have begun a fresh push to recapture western Mosul from 'Islamic State' fighters. More than 45,000 residents have fled the densely populated west in the past two weeks. (05.03.2017)

Local sources reported two further blasts targeting security forces at the scene shortly afterwards. Clashes between security forces and militants in the area were ongoing in the hours after the attack, sources said.

The attacks were not immediately claimed, although the so-called "Islamic State" (IS) militant group has carried out similar style attacks in recent months. In November, IS conducted bomb attacks in Tikrit and Samarra, apparent diversionary bombings intended to drive back military forces from gaining ground in Mosul, the country's second largest city and a key IS stronghold.

Wednesday's bombings could prove to be another diversionary attempt. IS' self-declared caliphate in Syria and northern Iraq is shrinking and a coalition of Iraqi military units, Shiite forces and Kurdish fighters are pushing deeper into Mosul. The US-backed coalition claimed the eastern half of the city in January and began an assault on the western side last month.

On Tuesday elite military troops recaptured the city's provincial government headquarters, while on Wednesday the Iraqi army claimed a key road leading west of Mosul towards Tal Afar, another IS stronghold, and on toward the Syrian border.

IS leader Abu Bakr al-Baghdadi declared IS' self-styled caliphate from a mosque in Mosul's old city in 2014 after the terrorist group stormed a number of cities in Iraq and Syria. Most of the cities have since been recaptured by military forces. However, losing Mosul could prove to be a potentially fatal blow to IS' presence in Iraq.

In Syria, the militant Sunni group still occupies the city of Raqqa as its stronghold, as well as most of the Deir al-Zor province.