Critics in Germany accuse the Scientology sect of denying fundamental human rights. The organization insists that it's a religion. While it is not banned, Germany's domestic intelligence monitors the group. 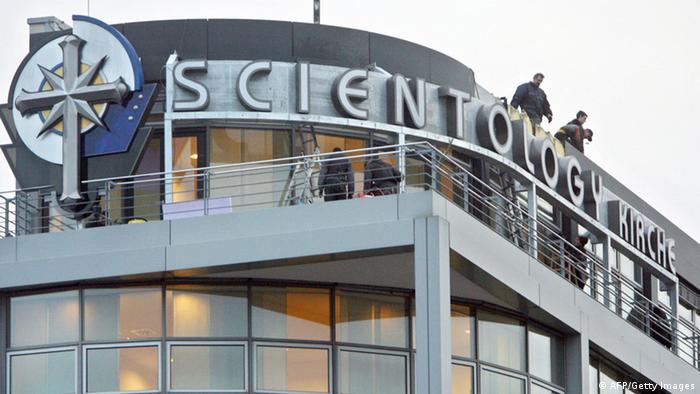 Ursula Caberta has given up. The former Commissioner of the Scientology Task Force for the city of Hamburg is Germany's best known Scientology critic and is a highly regarded expert far beyond Hamburg. The fact that she has recently resigned from her post shows just how difficult the fight against the sect and its structures is.

For almost two decades, Caberta was in charge of dealing with Scientology for the Hamburg Senate. Her aim was not simply to inform about the organization but also to help people that wanted to leave and get out. For her, Scientology is not just the problem of individual victims, but a threat to the national security of Germany. "I realized that Scientology is not a religion, but a totalitarian organization with a leadership cult and master race ideology." Caberta called for a ban – but never got the political support she would have needed. 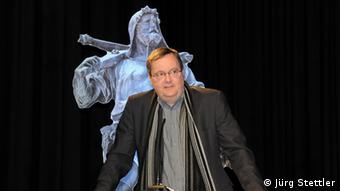 Scientology spokesman Stettler insists there's nothing to worry about

The Hamburg Senate also didn't support her as much as it could have. For financial reasons it closed the work group on Scientology in 2010 and handed the individual counseling over to the domestic intelligence agency. Caberta could have continued with her work, but no longer had any staff. She has now thrown in the towel because the political support is no longer there. "When there are not enough funding, it gets difficult to do the job," the 62-year-old told DW.

Scientology claims to be a religion and calls itself a church – and that's one of the points that many critics focus on. Jürg Stettler, spokesman for the organization, describes the group as an "idealistic union" and stresses that "Scientology was first established in Germany in 1972. There are eight churches, 10 missions and many individual groups." The churches and missions are registered associations and regulate their own internal activities. They finance themselves through membership fees and donations. As a religious organization, Scientology also has many tax advantages. 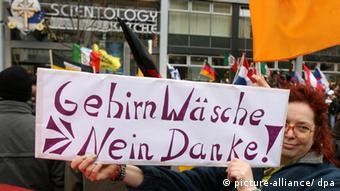 'No thanks to brainwashing!' is the message that protesters have for Scientology

But this is only what you see from the outside, says Manfred Napieralla of Hamburg's domestic intelligence service. Scientology is seeking money, power and influence. Critics, and people who have left the organization, talk about massive psychological pressure on members to fully conform to the sect's ideology. The organization seeks "to influence, use and control key people in politics, the economy, media and other areas of society," warns Napieralla.

This was not always the case. When it was founded in 1950 by L. Ron Hubbard as a helter-skelter mix of science fiction, philosophy and psychology, it first seemed to be just one sect among many. "In the late 1960s and early 70s, which was a time of social upheaval, there were a lot of cults and sects and Scientology was just one of many. It had time to quietly spread and grow," Napieralla explains.

In 1997, a conference of Germany's regional interior ministers decided to put Scientology under surveillance. The legality of the move was later upheld by the courts, which agreed that Scientology was aiming for a society that would infringe or even abandon basic rights like human dignity, or the right to equal treatment. 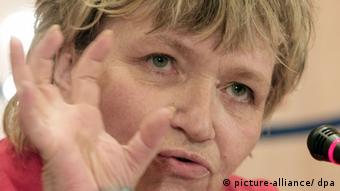 Scientology is not banned in Germany, but court cases, media focus and reports by the domestic intelligence service have led to a declining number of followers in Germany as well as in many other European countries. "If Scientology were not under investigation, or if there was less attention from the authorities, the organization would become more aggressive again and would be able to grow," Napieralla believes. Scientology ruthlessly attacks its critics. "There is a a special unit, the so-called Office of Special Affairs, with a department in Germany," he says. Scientology does not shy away from putting pressure on critics and spying on them, Napieralla explains.

And he should know. The Hamburg domestic intelligence office receives more than 500 requests for help each year from people who want information or want to leave the group. "Even if it's clearly going downhill with Scientology, they still cause a lot of anxiety and insecurity. They aim to reach a broad spectrum of society and they do a lot of subversive work," notes Napieralla. Ursula Caberta is convinced that the efforts against Scientology have to be kept up. "This is an organization that has survived many crises in the past," she warns. "If you don't keep up the work, they will quickly recover."

Germany's modern security system was founded to prevent the crimes of the Nazi era from ever occurring again. The current system is divided between constitutional protection, criminal police and the regular police. (04.07.2012)