New studies have found that water might be distributed across the lunar surface in more places and larger quantities than previously suspected. It could be useful for astronauts seeking refreshment or fuel in future. 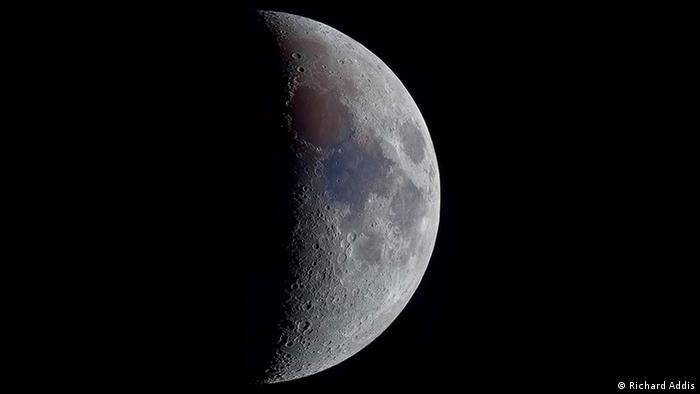 Two new studies published in Nature Astronomy on Monday suggest there could be much more water than previously thought, including ice stored in permanently shadowed "cold traps" at lunar polar regions.

"We announced that, for the first time, we've confirmed H2O in sunlit areas of the moon. This indicates that water might be distributed across the lunar surface," NASA tweeted on Monday from its moon-related account.

For decades the moon was thought to be bone dry. But 11 years ago, research found that water was relatively widespread in small amounts on the far side of the moon. A team of scientists is now reporting the first clear detection of water molecules in sunlit areas.

More than 15,400 square miles (40,000 square kilometers) of lunar terrain have the capability to trap water in the form of ice, according to the University of Colorado's Paul Hayne, who led the team of scientists. That area is roughly 20% larger than previous estimates, he said, adding that temperatures in these so-called cold traps are as low as minus 261 degrees Fahrenheit (minus 163 degrees Celsius), meaning they could hold onto the ice for millions or even billions of years.

Using data from NASA's Lunar Reconnaissance Orbiter, the scientists found cold traps as small as a few meters across and as wide as 18 miles (30 kilometers) and more.

The discovery raises the tantalizing prospect that astronauts on future missions  could tap into these resources for drinking and making rocket fuel.

"We believe this will help expand the possible landing sites for future lunar missions seeking water, opening up real estate previously considered 'off limits' for being bone dry,'' Hayne told The Associated Press.

Co-author Casey Honniball of the Hawaii Institute of Geophysics and Planetology said the water might be trapped in glass beads, or another substance that safeguards it from the harsh lunar environment. He said that if the water was found to be "abundant enough in certain locations," astronauts might be able to use it as a resource for human exploration.

Scientists believe the moon's water came from comets, asteroids, interplanetary dust, the solar wind or lunar volcanic eruptions. According to Hayne, researchers will have a better understanding of the sources "if we can get down on the surface and analyze samples of the ice."

The US wants NASA to put astronauts back on the moon by 2024 as part of its Artemis program.