Martin Schulz has unanimously won the nomination as Social Democratic party chairman and chancellor candidate for this year's election. His acceptance speech mixed traditional left-wing issues with attacks on populism. 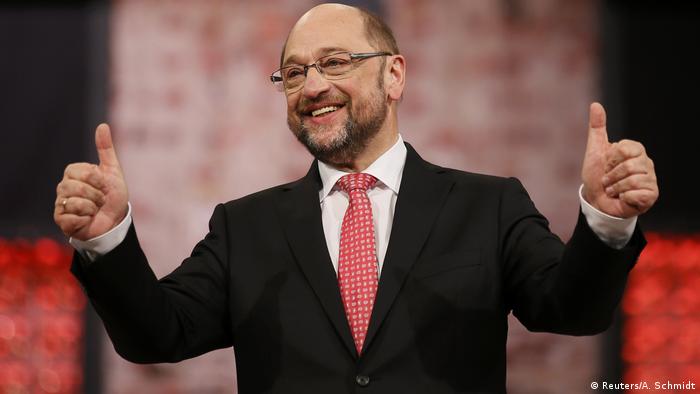 The mood was euphoric among SPD delegates at a special conference in Berlin as the party made the transition from former party chairman Sigmar Gabriel to Martin Schulz official. Schulz was elected unanimously, receiving all of the valid ballots for chancellor candidate and party chairman.

"I think this result is the first step toward retaking the chancellor's office," a grateful Schulz said after the announcement.

The selection of the former European Parliament president marks the first time an SPD chancellor candidate has ever been nominated with 100 percent of the vote.

In a speech before his election, Schulz emphasized the issues of social equality that have energized the grassroots and seen the SPD draw level in opinion polls with Chancellor Angela Merkel's conservative CDU-CSU.

"The SPD are back," Schulz said. "And that's good news for the people of Germany and Europe. If we don't ensure that things are socially equitable, then no one will." 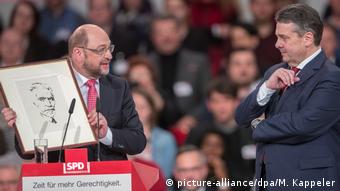 Schult takes over as party chairman from Gabriel

A leftist and pro-European

Schulz and other speakers repeatedly mentioned the trade unions, a traditional base of Social Democratic support. But Schulz, who served as president of the European Parliament until just two months ago, vigorously defended his party's support for the European Union.

"Those who want to do away with this bloc will find in me an energetic opponent," Schulz said. "Anyone who thinks you can separate national interests from Europe is wasting away the future of Germany."

Schulz also took potshots at US President Donald Trump, saying that an election like that in the United States featuring "fake news” and the "denigration of whole groups of the population" had "no place in Germany."

"A German chancellor can take a clear negative position" toward the US, Schulz added later in his speech, after praising former SPD chancellor Gerhard Schröder's refusal to back the US-led war in Iraq in 2003. 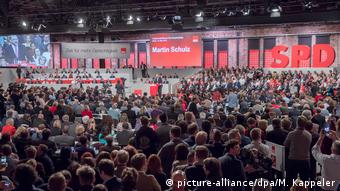 There was no shortage of pathos in Schulz's speech. The new candidate sought to depict himself as a man of the people, a poor student who had worked his way up from relatively humble origins. He underscored on multiple occasions the "respect” he felt for working people and people from lower-income groups.

"These plans are extremely unjust and not economically clever, and they create social divisions," Schulz said, drawing enthusiastic cheers from the delegates. He repeated proposals to extend unemployment benefits and provide additional training for the jobless.

Schulz has been credited with revitalizing the election by giving voters a mainstream option to Merkel and with taking support away from the right-wing populist Alternative for Germany (AfD). Schulz suggested parallels with the rise of the National Socialists during the Weimar Republic.

"The AfD uses rhetoric like that of the 1920s," Schulz said. "And we in Germany know where that leads. That's supposed to be an alternative for Germany? No! That's a shame for the Federal Republic of Germany."

He added that those who sought to roll back the cause of freedom "have in the SPD the most determined opponent they can have in Germany." That line drew a standing ovation from delegates.

The SPD will decide upon an official platform at a full party convention in June. But the remarks of the man in whom the party has placed its faith are a good indication of the issues the Social Democrats are intending to push in September's national election. 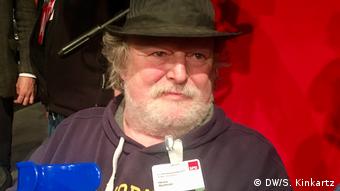 There has been a lot of media hype surrounding the new SPD chairman, but there is a real basis to the so-called “Schulz effect.” The party says that it has gained 13,000 new members since January, when Gabriel - now Germany’s foreign minister - surprisingly agreed to take a backseat to Schulz. 53-year-old Bente Seelig is one of the new converts.

“I had the feeling that it was time to act," Seelig told Deutsche Welle. “But it also had to do with Schulz personally. I just felt it was time for a political change."

Schulz has also dramatically increased the appeal of the SPD among younger voters.

“Schulz is very popular among young people who are interested in Europe," said 19-year-old Simon Grajer, who describes himself as part of “Generation Erasmus.”

“People who feel left behind by politics also feel drawn to Schulz in particular because his career has taken a lot of twists and turns," Grajer added.

After three straight national-election defeats and four years as the junior partner in a grand coalition with the conservatives, the SPD hope that they finally have a candidate who can challenge Merkel and perhaps retake power.

“He’s got good connections to the people, which has been a problem for the SPD," Richard Hillmer, the director of the Berlin think tank Policy Matters told DW. "The race is wide-open – in contrast to the previous elections."

Grajer is even more confident.

"We’ll have the chancellor," he said. "We’ll win the election, become the strongest part and form a coalition, whatever the other party or parties might be."

Social Democrats leader Katarina Barley told DW that the party's 100 percent vote in favor of Schulz's chancellor candidacy was "overwhelming." She also commented on the actions needed to fight against populism. (20.03.2017)