Michelin's new restaurant guide for Germany named three more three-star restaurants in the country, brining the total to nine. Second only to France's 26 three-starred eateries, Germany came out ahead of Italy. 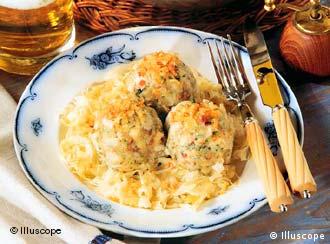 Sauerkraut and dumplings: typical, but probably not the award-winning German meal

France maintained its solid grip on the title of culinary king, but Germany claimed second place in the Michelin ranking, released on Wednesday, Nov. 14. In addition to the nine German restaurants awarded three stars, the guide's highest designation, 15 more came away with two stars.

"German cuisine has advanced to a new height," said Jean-Luc Naret, Michelin's director. "Germany is consolidating its position as the leading European gourmet nation behind France." 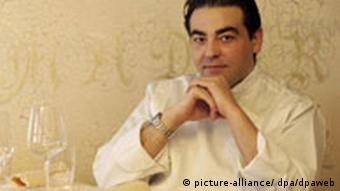 Amador says taste is his focus

Michelin publishes a separate guide for several countries each year, which are released on different dates. In the current edition for Italy, five restaurants across the country were marked with three stars. Spain and Portugal each have six three-star chefs.

Klaus Erfort, chef in the Saarbrücken restaurant of the same name, and Claus-Peter Lumpp, whose restaurant "Bareiss" is the second three-star eatery in the southern town of Baiersbronn, both earned their third Michelin star. Lumpp's neighbor Harald Wohlfahrt of "Schwarzwaldstube" had joined the three-star list in 1993.

Juan Amador, whose restaurant "Amador" is located near Frankfurt, was considered a surprising choice. The Spanish-born chef adheres to what's known as "molecular cuisine," having developed his style based on the work of his avant-garde countrymen Ferran Adria and other molecular cooks like Britain's Heston Blumenthal.

The experimental school often makes use of gels and thickening agents from and can include dishes in the form of lollipops or items that burst in your mouth, for example. 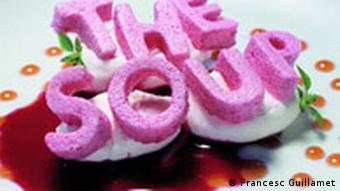 Amador, however, called "molecular cuisines" a "stupid term" in an interview with news agency DPA.

"Everything we make is basic on classical cuisine," said the three-star chef. "Even when we cook with modern methods, like with nitrates, the good product -- the known flavors -- are still the focus. We just take some things apart and put them back together again."

Michelin's Naret praised Amador for not simply copying molecular cuisine founders but developing his own personal style. His specialties include Müritz lamb with coconut and curry.

Watch DW-TV's cooking specials for great recipes from across Europe.