Schily for EU Asylum Centers in Africa | Europe | News and current affairs from around the continent | DW | 20.07.2004 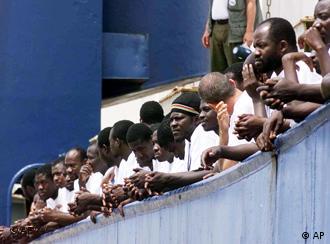 Schily had originally rejected the idea, but said that the most recent incident had caused him to change his mind. "Let's try this here," he told his EU colleagues at a regular meeting in Brussels on Monday.

Last week, German and Italian officials were struggling to do damage control after the head of a German aid organization and the capitain of the group's ship, Cap Anamur, had been arrested on charges of illegally bringing Africans to Italy.

The Cap Anamur crew had picked up the 37 refugees at sea after their dinghy had collapsed. They waited three weeks until Italy gave them the permission to enter a port in Sicily.

The German aid workers have since been released from jail but most of the Africans face swift extradition to their home countries. 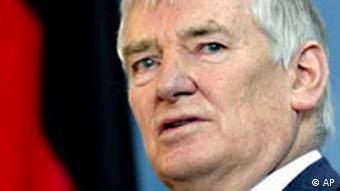 In order to prevent similar situations in the future, Schily (photo) now supports building centers in North Africa that can handle such cases before people embark on the dangerous trip to Europe.

"I believe that North African countries also have to be interested in preventing things from continuing as they are," Schily said, adding that Malta was planning to hold talks with Libya about the refugee problem in the Mediterranean. Similar talks could take place between Spain and Morocco, he suggested.

According to Schily, the new centers could hold people until a decision about their asylum request has been made.

Schily also said that saving people from drowing at sea was "naturally a duty," but he added that refugees could not be brought to European ports automatically afterwards.

Illegal immigrants attempt to cross the Mediterranean sea at a higher risk than ever before. High-tech surveillance systems leave them no choice but to take far more dangerous routes. (July 16, 2004)

The Business of Helping People

The nature of humanitarian aid has changed as governments outsource more of their development programs to privately-run organizations.The result: the needy are often exploited by the people meant to be helping them. (July 13, 2004)

Three Germans working for a charity organization that helped 37 African asylum-seekers reach Italy this week were released by an Italian judge on Friday. (July 16, 2004)