Huub Stevens' struggling Stuttgart was dealt a cruel blow in the final moments at the Veltins Arena following a superb encounter. Paderborn earned three vital points against Freiburg as Hannover drew with Wolfsburg. 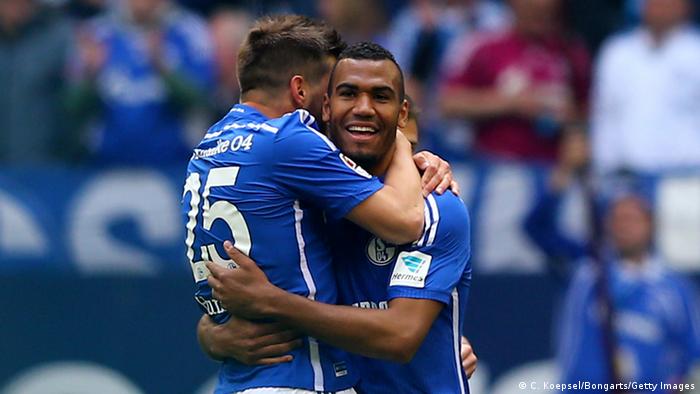 Struggling without a win in six games, Schalke were presented with the perfect start against relegation-threatened Stuttgart. Leroy Sane showed confidence dribbling towards the box before an attempted block took the ball towards Georg Niedermeier, whose loose touch fell to Klass-Jan Huntelaar and he couldn't miss. The strike was the Dutchman's first in the Bundesliga since November, ending a drought of 1196 minutes.

Stuttgart, however, who have often trailed this season, weren't fazed in Gelsenkirchen. Martin Harnik was quick to equalize after a neat one-two with Daniel Ginzeck, dinking it past Ralf Fährmann for the score. Just after half-time the turnaround was as if complete: Serey Die collected the ball in midfield and found Ginczek who earned his second assist by finding Filip Kostic on the left - who beat Fährmann for his second goal of the season.

At this point, Hubb Stevens' side looked in control and continued to force saves from Fährmann in the Schalke goal. However, with 13 minutes to play and against the run of the game, Schalke drew level. Eric-Maxim Choupo-Moting gathered the ball at the back post and found Huntelaar in the middle for his second of the day. The Royal Blues powered forward, looking to keep their Europa League hopes alive, and Jefferson Farfan crossed from the left to find Kevin-Prince Boateng, whose volley at goal was deflected past Ulreich. The late goal leaves Stuttgart bottom of the Bundesliga, a point behind Hamburg. 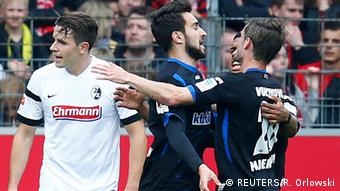 In this weekend's relegation battle, Freiburg - who let a 2-0 lead slip away a week ago - took the lead after a confident first half. Having dominated the early going, Nils Petersen handed the home side a late first-half reward after Jonathan Schmid had cut-back in the box to find the striker. This was Petersen's seventh goal in nine games.

Christian Streich's side looked to be on its way to a precious win before Paderborn substiute Lukas Rupp changed the game. The holding midfielder, who had entered the fray minutes earlier, streaked forward, playing a splendid one-two with Srdan Lakic who back-healed to Rupp to finish past Roman Bürki. The Bundesliga debutants were in dreamland ten minutes later as super-sub Rupp finished once again with composure after being played through by Mahir Saglik.

The home side kept fighting until the end and nearly leveled when Christian Günter struck the post with just minutes to play. With the win, Paderborn climb out of the danger-zone into 14th place. Freiburg is left level on points with Hannover and are dragged back into the thick of the relegation fight. 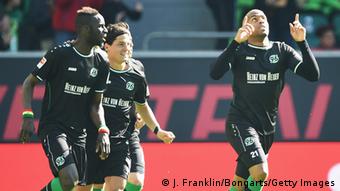 Jimmy Briand scored minutes after coming into the game

Having clinched a place in the German Cup final on Wednesday, Wolfsburg didn't look back in the first half against struggling Hannover. Michael Frontzeck's men - winless in 14 games - trailed early. Belgian star Kevin De Bruyne swung a ball across for Bas Dost, who scored his first goal since the beginning of March. For De Bruyne, it was his 19th assist in an already incredible Bundesliga season.

The lead was doubled soon after. Ivan Perisic, starting on the right, cut inside superbly before unleashing an unstoppable strike past Rob-Robert Zieler. Even the most optimistic of Hannover fans wouldn't have expected much to come from the remaining 45 minutes, but Hannover thought otherwise. Jimmy Briand came on at half-time and made an immediate impact, heading in from Edgar Prib's cross at the near post. Hannover's wildest dreams became reality just 11 minutes later as Salif Sane's incredible bicycle-kick sailed pasted a helpless Diego Benaglio.

Wolfsburg remains five points clear of Borussia Mönchengladbach, whilst Hannover sit in the relegation zone - two points ahead of Hamburg. 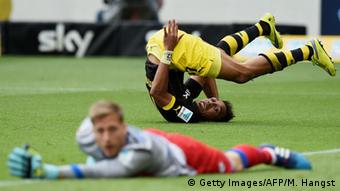 It was a tough game for Pierre-Emerick Aubameyang

In the the battle for a Europa League place, Hoffenheim started strongest and led when Kevin Volland snuck a goal past Mitchell Langerak. But Borussia Dortmund - without Marco Reus and several others - responded immediately. An inswinging Henrikh Mkhitaryan corner found Mats Hummels surrounded by defenders, but the German international used his head to find the right bottom corner. Dortmund had the upper hand in the second half, but Oliver Baumann saved the game in the Hoffenheim goal. The final Europa League spot is still up for grabs.

In Bavaria, where Augsburg welcomed Cologne, it took 70 minutes for the guests to get a shot on goal, in their ninth scoreless game of the season. Colgone remain comfortable in mid-table, whilst Augsburg is looking over its shoulder in sixth place after a stalemate.

Bremen took all three points at home in a battle with Frankfurt. The home fans welcomed club legend Thomas Schaaf back with open arms, but the game had little to shout about until the final 20 minutes. Davie Selke earned his side the win by surprise, after a ball nailed him in the chest and bounced in. Werder Bremen are now just a point behind Augsburg in seventh with dreams of Europa League football ever closer to reality.

It's all about momentum, right? "The Bundesliga is behind us," said Bayern coach Guardiola ahead of Saturday's matchup with Leverkusen. But the Champions League still lies ahead. And Bayern better shape up for Barca. (02.05.2015)

Wolfsburg's men's football team may only be second best in the Bundesliga, but the women's team sets the standard in Germany. On Saturday, the Wolves beat Turbine Potsdam 3-0 to take the German Cup. (01.05.2015)