In the dispute over Greece's bailout, German Finance Minister Wolfgang Schäuble (CDU) has said he would resign rather than change his position on the deal. His hardline stance has met with criticism during negotiations. 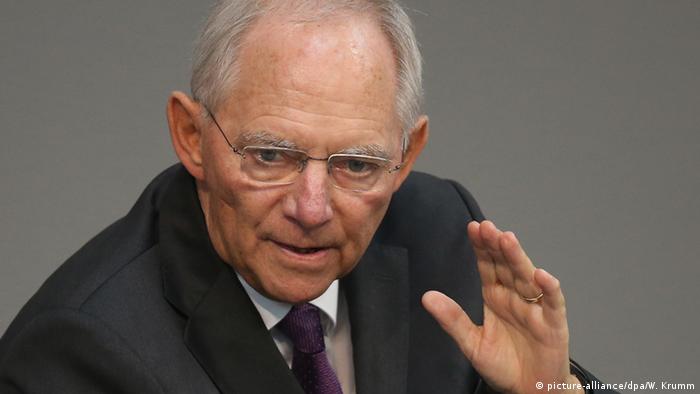 In an interview published in this week's edition of the German magazine "Der Spiegel," Schäuble made it clear that although he was not currently considering resigning, he had a duty to his role and his principles.

"Politicians' responsibilities come from the offices they hold. Nobody can coerce them. If anyone were to try, I could go to the president and ask to be relieved of my duties," the 72-year-old told the magazine.

Asked whether Schäuble had plans to resign, a spokesman for the Finance Ministry referred to the same question in the "Der Spiegel" interview where Schäuble said: "No. Where did you get that idea?"

In light of Greece's third bailout deal, which was agreed among eurozone leaders in the early hours of Monday morning, the German finance minister was met with a backlash of criticism both from his party's socialist coalition partner, the SPD, and from the public on social media.

During Schäuble's speech in the German Bundestag on Friday, leader of the Left party, Gregor Gysi, tweeted that "the chancellor the last few weeks wasn't Merkel, but Wolfgang Schäuble," and called him an "undemocratic and anti-social" bureaucrat who was trying to "destroy the European idea" during his speech on the Bundestag floor.

'Grexit' still on the cards?

Schäuble admitted in Saturday's interview that over the past few weeks he and Chancellor Angela Merkel were not always of the same opinion. While Merkel has remained open to negotiations on Greece's bailout in recent days, Schäuble has approached further talks with caution.

"Divergent opinions are a part of democracy. In such a case, you jointly hash out a solution," he said, adding, "We know that we can rely on each other."

Following the bailout deal on Monday, Schäuble said in an interview with Germany's Deutschlandfunk radio that a temporary Greek exit from the eurozone might still be the best for everyone if Athens cannot reduce its debt.

Defending his stance in the "Der Spiegel" on Saturday, Schäuble said: "We never said that Greece should leave the eurozone. We only called attention to the possibility that Athens itself can decide on taking a timeout. Debt relief is not possible within the currency union. European treaties do not allow it."

German lawmakers approved the reopening of debt talks with Athens on Friday by a margin of 439 to 119.

Greek Prime Minister Alexis Tsipras has made changes to his government, removing ministers who voted against reforms necessary for a rescue deal. Nine changes were made overall. (17.07.2015)