Greek Finance Minister Yanis Varoufakis has met with his German counterpart, Wolfgang Schäuble, in Berlin. Germany has pledged to help Greece out of its financial woes. 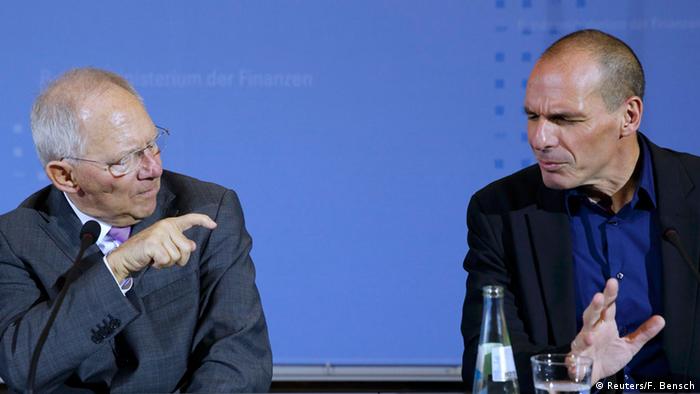 Greek Finance Minister Yanis Varoufakis was in Berlin for talks with his German counterpart, Wolfgang Schäuble, on Thursday. At a joint press conference, the two spoke about Greece's new government, the country's debt and its role in Europe.

Speaking first, Schäuble said the central point of discussion with his Greek counterpart had been to find a final solution to the stalemate, but none had been found today.

"We agreed to disagree," he said. "We are both very committed to European integration, for a relevant Europe."

He added that Greece's financial woes were the result of domestic problems and that Europe was not at fault, but that Germany would do all in its power to help establish a sustainable, competitive and collective future. "Unity is the best edge" Europe has in the future, he said, adding that trust was the foundation of unity. He also pledged "all possible help" to set up an efficient tax system.

Regarding the current bailout program, Schäuble said any changes would first have to be voted on and that no conclusion had been drawn on Thursday.

Referring to the recent Greek elections and its new government, Varoufakis agreed that a solution to the crisis was needed. "Europe is at a crossroads," he said, adding that a solution must be found quickly.

Unlike his German counterpart, however, Varoufakis said the two politicians "couldn't even agree to disagree." He added, however, that Greece's government did not seek to renege on loans from the European Union, European Central Bank and International Monetary Fund, granted in exchange for the country's imposing the crushing austerity program required by its creditors, but to hold talks on "a new contract."

The Greek government had earlier announced it would give the country's bank access to additional emergency funds, amid renewed fears that the country could be headed for bankruptcy after the ECB tightened the screws on Athens.

The head of Germany's Bundesbank, Jens Weidmann, warned Greece against using emergency funding to prop up its banks long-term and said countries must bear the impact of their decisions, further isolating Athens after it all but ditched a reform-for-aid deal.

'Fruitful' meeting at the ECB

On Wednesday, Varoufakis flew to Frankfurt for talks with ECB President Mario Draghi. After a meeting that lasted about an hour, Varoufakis told reporters the two had had "a very fruitful discussion and exchange."

There was an "excellent line of communication, which gives me a great deal of encouragement for the future," Varoufakis said.

He has floated the idea of swapping some of the Greek government's debt for either growth-linked or perpetual bonds to alleviate pressure on Athens' funds. However, the Financial Times reported the ECB was opposed to considering such a debt swap plan.

The visits are part of a series of visits throughout Europe. Also on Wednesday, Greece's new Prime Minister Alexis Tsipras was in Brussels to rally support for his plans to renegotiate Greece's international bailout terms.

"I am very optimistic that we will try to do our best in order to find a common, viable and mutually acceptable solution for our common future," Tsipras told a joint press conference with European Parliament President Martin Schulz, who he met along with European Council President Donald Tusk and European Commission President Jean-Claude Juncker.

The European Commission, the International Monetary Fund (IMF) and the European Central Bank (ECB) are responsible for overseeing Greece's finances. The bulk of Greece's bailout loans come from other eurozone countries and from the IMF.

Greece's leadership is trying to convince European leaders that easing austerity and reduced debt payments are needed to kick-start the country's sluggish economy. But the bloc's more fiscally conservative members, including Germany, have thus far resisted the idea of changing the bailout deal.

The Greek government has announced it will give the country's bank access to additional emergency funds, amid renewed fears that the country could be headed for bankruptcy after the ECB tightened its squeeze on Athens. (05.02.2015)

Global debt has been soaring since the turn of the millennium, a fresh study says. The survey focuses on a number of nations with a negative balance, but singles out China because of the structure of its debt load. (05.02.2015)

Asian and European stocks plus the euro have handed back earlier gains, following the ECB's decision to adopt a tough stance on Greece. The country's debt will no longer be accepted as collateral for loans. (05.02.2015)