German Finance Minister Wolfgang Schäuble has again rejected US accusations of using currency manipulation to boost German exports and widen the American trade deficit, which jumped to a five-year high in January. 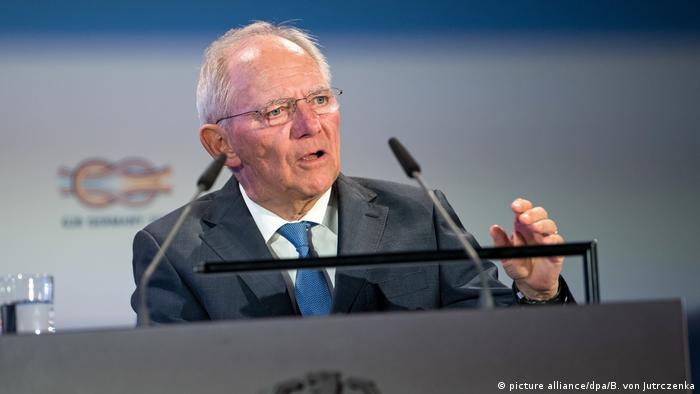 The US Commerce Department unveiled latest foreign trade data on Tuesday showing that the country's trade deficit jumped to $48.5 billion in January - a $4.2 billion increase from December and the highest monthly total since March 2012

The data showed trade was robust, with exports and imports of goods and services hitting their highest levels for a single month since December 2014.

The month-on-month trade gap was mainly the result of a $1.2 billion drop in US exports of civilian aircraft and engines. Compared with January 2016, the deficit was 12 percent higher.

The January increase continues the 2016 trend in which the United States posted its highest trade deficit in four years. The data is

Another record year for German exporters

Sluggish global hasn't prevented German exporters from shipping a record volume of goods abroad over the past 12 months. Imports also reached a new high in 2016, but the increase was less pronounced. (09.02.2017)

The US is no longer Germany's most important trade partner, but China, fresh figures from the statistics office have suggested. With Washington now pursuing a protectionist agenda, that's unlikely to change. (24.02.2017)

also likely to be readily used by the new US president in his campaign against what he dubbed unfair trade policy pursued by his predecessor Barack Obama.

Deficits a risk to US security

White House trade advisor Peter Navarro darkly portrayed trade deficits as a threat to US national security and prosperity in a speech to a conference of the National Association of Business Economics on Monday.

As he singled out China and Germany in particular, he said that "in the real world of fixed exchange rates, managed floats and outright currency manipulation" the US trade deficit could not adjust as economists said it should in theory.

That would lead to large and persistent trade deficits, he added, which would leave the US open to foreign takeover.

The Trump administration has vowed to take aggressive actions to reduce the trade deficit, and to upend prevailing trade policy by renegotiating or withdrawing entirely from international trade pacts.

January figures show that the US trade gap with China rose 13 percent over the level in December. Widening deficits were also recorded with Mexico, Saudi Arabia and Germany.

Germany on the defensive

As the US trade deficit with Germany grew by more than five billion dollars between December and January, German finance minister Wolfgang Schäuble again tried to explain the gap in a news conference on Tuesday.

Schäuble said the surplus of exports over imports was due to the German economy's competitive strength, which was crucial for the stability of the eurozone.

He rejected accusations from the Trump administration that Berlin was using underhand methods to weaken the euro and make exports cheaper, saying there was "no manipulation at all." Schäuble noted that the value of the euro currency was the result of the European Central Bank's monetary policy.

"But we are, of course, willing to openly discuss [the matter] with anybody," he told journalists, adding that he first of all needed to know "what exactly is meant by manipulation."

The German Finance Minister expressed the hope that a meeting with his American counterpart Steve Mnuchin at next week's G20 summit of advanced and developing economies would bring more clarity.