Schäuble: Any Merkel-led coalition will stick to euro consolidation | Business| Economy and finance news from a German perspective | DW | 24.09.2013

Schäuble: Any Merkel-led coalition will stick to euro consolidation

The German Finance Minister has said any possible new government coalition led by Chancellor Angela Merkel will stick to Berlin's policy of consolidating the euro. He warned a laxer approach was not advisable. 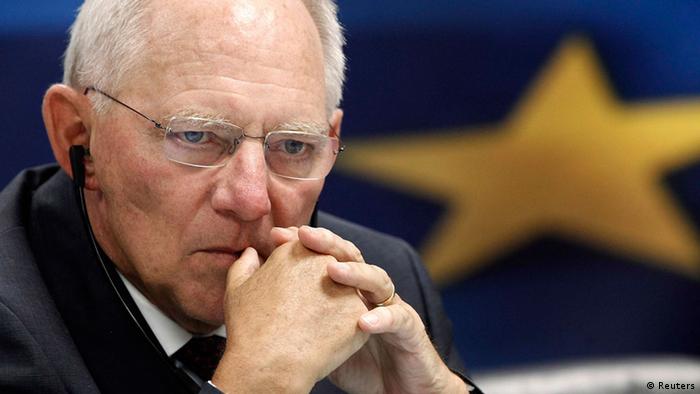 Two days after a landslide general election victory for German Chancellor Angela Merkel's Christian Democrats, her party ally and finance minister, Wolfgang Schäuble, said Tuesday there would be no major change to Berlin's policy of trying to resolve the euro debt crisis with strict budgetary discipline.

Schäuble told the "Leipziger Volkszeitung" regional newspaper that any possible Merkel-led government coalition would remain loyal to the course pursued over the past couple of years despite strong headwinds from a number of fellow eurozone partners who'd argued that too much austerity would nip any nascent growth in the bud.

The former ruling coalition in Germany has not entirely been able to keep the eurozone crisis under wraps in the election campaign. The new government will have a hard time communicating the truth. (20.09.2013)

Wolfgang Schäuble said he was confident there would be agreement with either the Social Democrats or the Green party - Merkel's two possible coalition partners - on the need to continue what he described as a successful path towards getting the debt-stricken euro area on its feet again after a protracted recession in many parts of the 17-member single-currency zone.

The German Finance Minister made it abundantly clear that he was not willing to give in to demands by France and some southern European governments to deviate from the previous austerity course with a view to being able to spend more to encourage growth.

"I'm also in favor of more growth and more jobs," Schäuble said. "But I believe that only through budget consolidation and accompanying structural reforms can you get there." He claimed that higher public deficits would not be a solution to the crisis, but would rather exacerbate it.

Schäuble conceded that recent austerity measures in much of Europe had been painful for many, but added that large-scale endeavors in Spain and Greece for instance were beginning to bear fruit.

Germany's far-right political party is holding a two-day meeting in a border town close to the Netherlands. Critics have blasted the decision after other parties delayed their conferences or held them online.

France wants to vote on a French-language version of the Brexit deal. But the EU's chief negotiator has confirmed the talks have dragged on for so long there is not enough time for a translation.