Water is a precious and scarce commodity in the Middle East. Some fear that it could even trigger wars. In Jordan, German aid workers are pushing for an efficient use of what's increasingly called "blue gold." 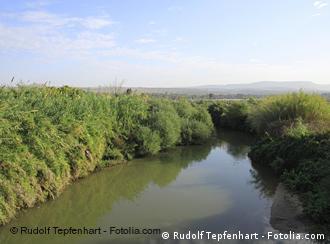 Once a mighty current, the Jordan River has been reduced to a thin stream in some places

With an annual allotment of just 180 cubic meters of water per person, Jordan is considered to have one of the highest rates of water shortages in the world.

The country's dwindling water resources are so overstretched that it's feared that a long-term supply of water for households, industry and agriculture is now at risk.

Environmental experts warn that if Jordan's water consumption pattern is not changed, it could lead to disastrous consequences for the population and environment. 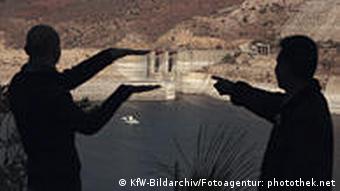 In some places, such as the Jordan River, the results of extreme water scarcity are already visible. The river, where according to Christian tradition Jesus was baptized, has been the most important water source in the country for countless generations.

Until the 1930s, the Jordan River was a 65-meter (213 foot) wide waterway. Today, in some places all that's left is a muddy trickle, according to the non-governmental organization Friends of the Earth Middle East (FoEME).

The group says the river has “turned into a simple stream, dried out because of the extreme use of water and ruined due to pollution.”

The high water salinity has led to the disappearance of trees such as the poplar and willow, and animal species such as the otter. It's estimated that the region has lost half of its biodiversity. 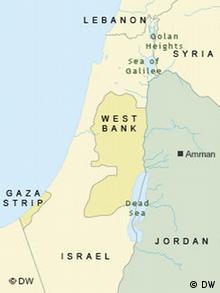 The Jordan River forms the border between Israel and Jordan

German development aid workers in the region are well aware of the problem and are working to help reverse the river's decline. Rudolf Rogg, regional director of the German Development Service (DED) in the Palestinian territories and in Jordan, says that water-intensive agricultural practices are damaging the fragile water supply.

According to him, farmers use a large part of the available supply to irrigate their fields, but only contribute a small part towards boosting the country's economy.

Munqueth Mehyar, the Jordanian director of FoEME, agrees. “The less agriculture, the better,” he said. Mehyar said he was happy that his organization was receiving “moral help” from Germany.

The DED supports Jordan's agricultural ministry and water ministry in creating concepts for water-efficient products together with the country's farmers.

Rogg said one example was the large-scale planting of bananas in the Jordan Valley – a practice that uses too much water.

“That's why you have to stop banana plantations, just as you must stop irrigation in the highlands and return to a pastoral economy,” he said, adding that talks were underway with farmers to explore how they could save water in the agricultural sector.

“Our experience is that water policy is changing and has shifted toward a very progressive water management plan – namely, rolling back intensive agriculture and reducing water consumption in the cities.” 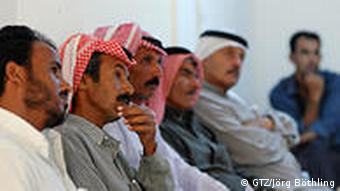 The distribution of water also poses a big challenge to Jordan. The DED is working together with Germany's GTZ, a state-owned organization working for sustainable development worldwide, and a German pump manufacturer to improve the piping and pump systems in Jordan.

Water from the Jordan Valley, which lies below sea level, needs to be pumped over a height of 1,000 meters to be transported into the capital Amman. That requires a huge amount of energy. Most of the pumps used for the purpose are outdated and decrepit.

That makes the Jordanian water authority not just one of the largest electricity consumers in the country, but also a major polluter, as the electricity is generated by burning fossil fuels. Efficient pumps and stable electricity grids would have a twin effect – it would protect Jordan as well as the country's climate.

The world has failed to curb a dangerous loss of biodiversity, UN report says

Eight years ago, the international community pledged to curb ecosystem loss by 2010, the International Year of Biodiversity. But the United Nations' latest outlook indicates a 'collective failure' to reach those targets. (11.05.2010)

The Mekong Delta is threatened by rising sea levels. Mangrove forests offer some protection but they're being cleared for large shrimp farms. Organic shrimps and tree-planting could be a way out of the dilemma. (13.04.2010)

A representative group of citizens has agreed on recommendations to help the German government cut emissions and fairly achieve its climate goals.