Saudi sisters given help after fleeing to Georgia

Two Saudi Arabian women who fled their families to Georgia this week have been offered help by authorities. The sisters are the latest in a stream of women using Twitter to escape the Saudi male guardianship system. 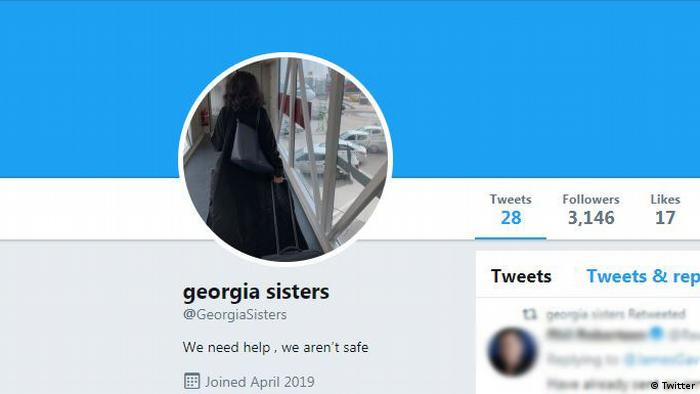 Georgian authorities offered to help to 28-year-old Maha and her 25-year-old sister Wafa Alsubaie after the fate of the two Saudi women attracted attention on social media. The sisters had fled Saudi Arabia for fear of their family.

On Tuesday, the Maha and Wafa took to Twitter with a plea for international protection, claiming they were trapped in Georgia and that their passports had been blocked by Saudi Arabia. They said that their father and brother were looking for them.

Georgian immigration officials visited the women to offer asylum application information before escorting them to a center for refugees, the Georgian Interior Ministry said Thursday.

The ministry added that the family members the women said were pursuing them were not in the country.

Maha and Wafa are the latest in a slow but steady stream of women fleeing Saudi Arabia's social rules which require women to obtain permission from a male "guardian" to work, marry or travel.

In March, two young women found refuge in an undisclosed country after spending six months in Hong Kong where they had escaped to from alleged beatings and abuse by their male relatives.

Eighteen-year-old Rahaf al Qanuun made headlines in January after barricading herself in a Bangkok airport hotel and making her appeal for asylum on social media as well, which was later granted by Canada.

But some women have been forced to return, such as Dina Ali Lasloom who was picked up by male relatives at Manila airport in 2017 after posting pleas on Twitter as she attempted to reach Australia.

The kingdom has eased restrictions on women in recent years, allowing entrance to sports matches and voting in local elections, while a ban on driving was lifted in 2018.

But organizations such as Human Rights Watch have argued the reforms to be superficial in the face of the "massive everyday discrimination" of the male guardianship system, which sees a woman "controlled by a man from birth until death."