The Saudi-led coalition battling Houthi rebels has said it seized an Iranian boat carrying arms to Yemen. The coalition has long claimed Iranian involvement, but this is the first time it is furnishing evidence. 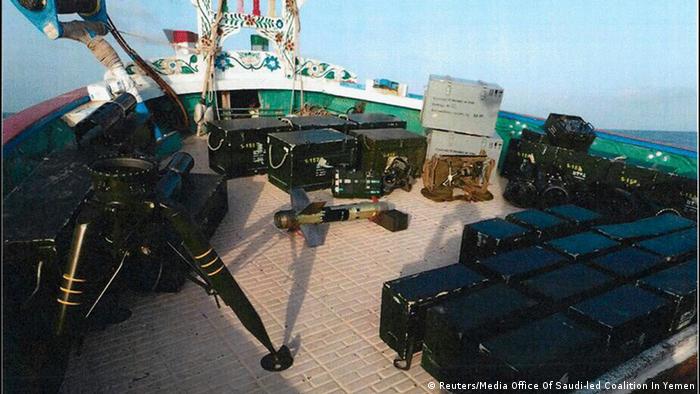 The Saudi-led Sunni Arab coalition said in a statement that the fishing boat was seized in the Arabian Sea on Saturday, 240 kilometers (150 miles) off the coast from the Omani port city of Salalah.

The statement said papers on the boat showed it was registered in Iran. Among the weapons found were nearly 70 anti-tank shells, including 54 BGM 17 shells (better known as TOW anti-armor missiles),15 shell battery kits, four firing guidance systems, binocular batteries and launchers. Together the components make up the system required to launch TOW missiles.

The Saudi-led coalition has long claimed that Iran is supplying weapons to Shiite Houthi rebels it has been fighting since March, but this is the first time it is providing evidence even as it has maintained a naval blockade around Yemen. Iran and the Houthis have denied the allegations, saying the support is political.

The weapons seizure has not yet been verified by Iran or the United States, which is providing intelligence and logistical support to the coalition in its six-month air and ground campaign to restore to power former Yemeni President Abed Rabbo Mansour Hadi.

Coalition ground forces have also recently entered combat in a so-far unsuccessful bid to push the Houthis from the capital, but have retaken the badly damaged port city of Aden.

The coalition's claims that they have seized Iranian weapons comes as tensions rise between the two rivals following the death of at least 769 pilgrims, including more than 200 Iranian nationals, in a hajj stampede last week. Iran remains concerned as many as 300 nationals remain missing as a war of words between Tehran and Riyadh heats up.

The Saudi-led coalition has come under mounting criticism for the heavy toll the war has taken on civilians, 80 percent of whom are in need of humanitarian assistance. At least 5,000 people, including nearly 2,500 civilians have been killed in the conflict since the end of March.