A German news report says Saudi authorities have offered to help investigate two Islamist attacks in July. It said this comes after both attackers were found to have had contact with possible IS backers in the kingdom. 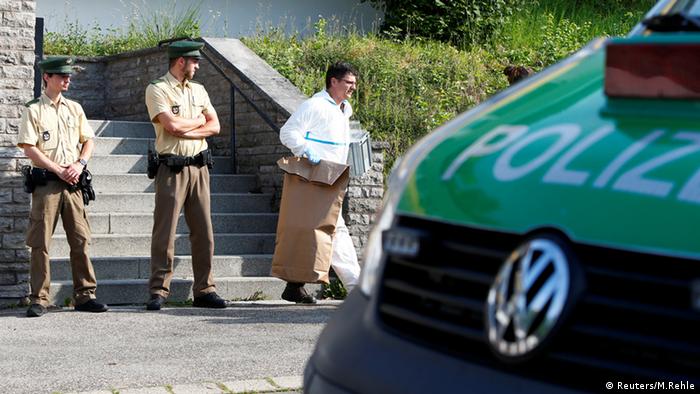 In the report on Saturday, the German news magazine "Spiegel" cited a senior Saudi government official as saying that Riyadh wanted to help Germany find those behind Islamist bomb and ax attacks in July that left 20 people injured and the two assailants dead.

"We want to jointly do everything possible to clarify the backgrounds of the attacks," the official was quoted as saying.

Saudi authorities were already in contact with the German authorities, according to the magazine.

The "Spiegel" report said new findings had shown that up until shortly before their crimes, both attackers had been in close contact via a chat conversation with possible supporters of the jihadist group "Islamic State" (IS) in Saudi Arabia.

Traces of the chats indicated that both men had not only been influenced by the unknown IS backers, but had even received instructions on how to proceed, the report said.

According to "Spiegel," one of the attackers, a 17-year-old thought to be from Pakistan or Afghanistan, had initially been told to drive a car into a crowd. The attacker rejected the idea on the grounds that he didn't have a driver's license. Instead, he employed an ax to assault passengers on a train near the southern city of Würzburg on July 18, seriously wounding five people before being shot dead by police.

The report said investigators had concluded that the other attacker, who died when the explosives he was carrying in a backpack detonated, was meant to set them off by remote control in a crowd at a music festival in the town of Ansbach, also in the southern state of Bavaria.

Shortly before the July 24 attack took place, his chat contact had called on him to film the explosion and the resulting fire and send the film to IS, "Spiegel" said. But the explosives detonated prematurely, killing the 27-year-old Syrian attacker and injuring 15 other people.

German federal prosecutors are investigating both attacks as terrorist crimes.

The US Senate has passed legislation that would allow families of 9/11 victims to sue the government of Saudi Arabia. It sets Congress on a collision course with the White House and Saudi Arabia. (17.05.2016)