Sarkozy calls for a global organization on the environment | World | Breaking news and perspectives from around the globe | DW | 18.07.2009

Sarkozy calls for a global organization on the environment 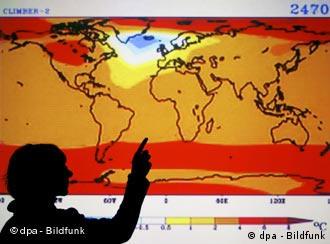 French President Nicolas Sarkozy made the call for a global environmental organization after a working lunch at the French consulate in New York City with United Nations Secretary General Ban Ki-moon, where the two took part in wide-ranging discussions on global issues, with climate change topping the agenda. 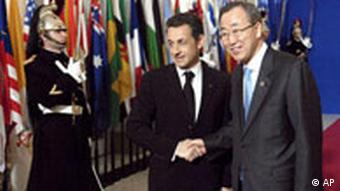 Speaking on French television after the meeting, Sarkozy called for new action on environmental issues, which were a major part of discussions at this month's G8 summit in Italy. Sarkozy didn't give any indication of how he thought this new global organization should be laid out.

"We will fight, hand in hand, a battle against the consequences of climate change. We must create a global organization on the environment," he added.

The key decision of the G8 summit was an agreement that world efforts should be directed towards limiting global warming to 2 degrees Celsius (3.6 degrees Fahrenheit) above eighteenth-century levels, to prevent catastrophic climate and weather changes around the world.

Ban said he was grateful for Sarkozy's "full commitment to work together to seal the deal in Copenhagen on a globally acceptable" climate change agreement.

The world already has a global environmental organization. It's called the United Nations Environment Programme (UNEP), established in June1972 as a result of the UN Conference on the Human Environment.

Part of the mandate of the UNEP is "to promote international co-operation in the field of the environment and to recommend, as appropriate, policies to this end." 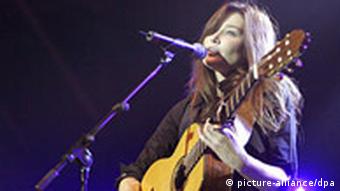 Almost every international agreement on the environment has come under the auspices of the UNEP, including the Kyoto Protocol. It is unclear how a new global environmental organization would really be different.

At an international conference on climate change in Copenhagen in December, governments are to agree on goals to fight climate change under a new Kyoto Protocol. The current protocol will expire in 2012.

Sarkozy is in New York with his wife Carla Bruni-Sarkozy to attend a fund raising concert to celebrate the 91st birthday of former South African President Nelson Mandela. Bruni-Sarkozy, the model turned singer turned first lady, will be performing at the concert.

None of the G-8 countries is on track to fend off the dangers of climate change, WWF's Kim Carstensen told Deutsche Welle. Leaders need to agree on goals and financing for a deal at major climate talks in December. (08.07.2009)

As Italy gears up to host the G8 summit, European countries are pushing for a commitment from developing countries to reduce greenhouse gas emissions. But not all G8 members are on the same page. (07.07.2009)