Sara Taksler: 'Bassem Youssef made an impact far beyond Egypt'

American filmmaker Sara Taksler is currently finishing a documentary about Bassem Youssef, Egypt's first political satirist. In an interview she says what it was like shooting in Egypt and why political satire matters.

Miss Taksler, you are currently finishing a documentary about Bassem Youssef, the host of Egypt's first political satire show. His popular TV program "El Bernameg" (in English: “The Program”) was also broadcast on DW and used humor to speak openly about politics and daily life in Egypt. Youssef's show was canceled last summer due to increasing pressure from the new Egyptian government and now you are telling his story. What was filming in Egypt like?

Sara Taksler: Altogether, I had a really great time in Egypt. But it's a difficult place to film right now in a lot of ways. In America, everyone is very camera-happy, people are taking selfies of themselves and there are cameras everywhere you go. In Egypt that's not the case right now. People are understandably suspicious and worried about a lot of things because there's been so much change in a short period of time. So it's difficult to film, especially outside. 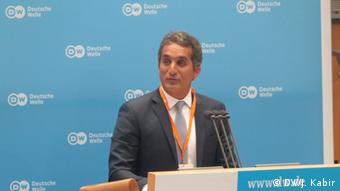 Bassem Youssef's show was often viewed in outdoor cafes on the street and so I had a cameraman film one of these outdoor cafes for the documentray. But someone didn't like it and was suspicious and thought he was filming something with political intentions and beat him up and took the memory card. So we had to be extra cautious about hard drives and footage because Bassem Youssef is a controversial person in Egypt.

Part of the reason why Bassem Youssef has faced a lot of opposition is because he was accused of insulting Islam, Egypt's president and disrupting public order in a time where the country was in turmoil. Is it ever inappropriate to make comedy in a time and a place where people are suffering?

Egypt has had a lot of very difficult, violent situations and sometimes when something tragic happens, people might think it's inappropriate to make a joke. That's of course always a big debate - is it too soon, or is it the right way to go about it? And that's something that Bassem Youssef and his team were dealing with quite often because they were doing comedy in a time and a place where a lot of people were suffering, so they were trying to figure out a good way to handle that.

But when so many bad things happen in a row people tend to get tired of feeling bad and they just need an outlet. So sometimes I think comedy is harder to do, but so much more appreciated when the people around you are suffering because they are thankful when somebody makes them laugh and distracts them. And I think that's part of why Bassem Youssef's show was so incredibly successful because he and his team were providing something that everyone was really hungry for.

Apart from providing laughs and distractions, Bassem Youssef was also fighting for free speech. How important is satire for free speech and non-violent protest? 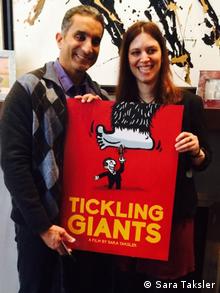 Political satire has been around forever, even if it's not televised. And I think it's really important to have, even though it's not absolutely essential. But satirical hosts are shining the light on certain things that you might consider to be injustices.

Bassem Youssef and his team had an impact. You can throw your fist, and you make a noise. But they were articulate. Their thoughts were being heard and they were obviously heard by people in power if they were considered to be a threat enough to want them to stop. If you have 30 million viewers people obviously think what you do matters.

I think they've helped build the landscape of what satire will be in that region, not just Egypt. There are lots of people already that are trying to be the next Bassem Youssef. He inspired them. He wasn't a political person at all, he wasn't even a comedian and he made this incredible difference.

That's why the title of my documentary is "Tickling Giants." I hope that the documentary speaks to the idea that we all have our own giants in our world. We have a choice.

Sara Taksler is a senior producer at "The Daily Show with Jon Stewart," a political satire show in the US. That's how she got in touch with Bassem Youssef, who came to observe "The Daily Show with Jon Stewart" before starting his own political satire show in Egypt. When Bassem Youssef was called in for questioning for jokes he made about religion and the government on the show, Taksler decided to make a documentary about him and his team and how they were fighting for free speech. Her film "Tickling Giants" explores how free speech and non-violent protest can make an impact and raises the question of whether a power structure that is threatened by a comedy show is really all that powerful.

You can support Sarah Taksler's fundraising campaign to finish her documentary about Bassem Youssef here.

An Egyptian TV station has suspended the airing of the weekly satirical show "El-Bernameg." The news has come one week after host Bassem Youssef mocked the country's new military-backed rulers. (01.11.2013)