In a musically strong year, a no-frills song by a brother and sister team was the clear favorite. This marks the first time Portugal has won the competition. 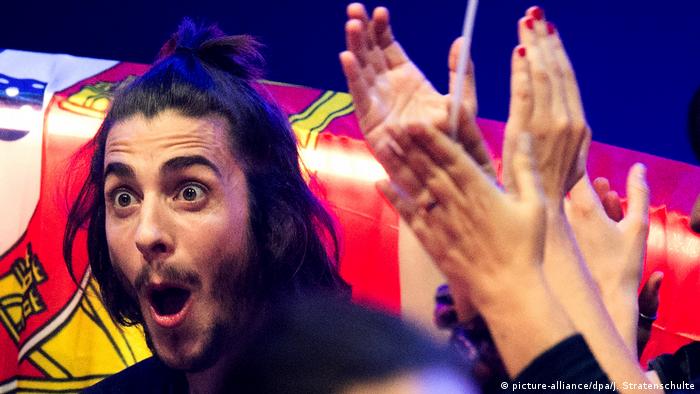 "We live in a world of disposable music," said Portugal's Salvador Sobral after being announced the winner of the Eurovision Song Contest at the end of the event on Saturday night in Kyiv. "This is a vote for people who actually mean something with their music. Music is not fireworks, music is feeling, so let's try to do this and bring music back."

Then the singer took to the stage again, joined by his sister Luisa, who had composed the melancholic, fado-laced chanson "Amar Pelos Dois" ("For the Both of Us") about a hopeless and selfless love.

Authenticity and sincerity are Sobral's trademarks, and for both juries and TV audiences, there was no escaping his charm.

Notwithstanding the polished Eurovision show, where nothing is left to chance, he made every performance sound spontaneous and different. For health reasons, he had missed part of the rehearsal schedule: Sobral, who is awaiting a heart transplant, cannot travel for more than two weeks' time without his medical team.

In over six decades of the Eurovision Song Contest, this is Portugal's first win. Sobral's 758 points were a clear lead over the 615 of Bulgaria, followed in a considerable margin by Moldova (374 points), Belgium (363), Sweden (344) and - the clear favorite in the weeks before - Italy (334 points). 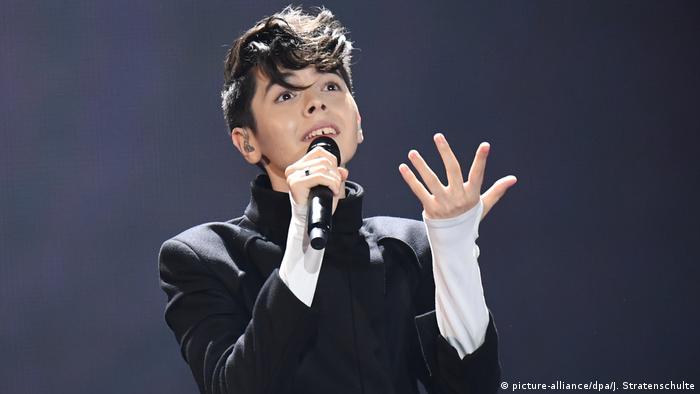 Bulgaria's Kristian Kostov astonished all with his vocal maturity

The songs exhibited a range of styles. Bulgaria's entry was an absolutely poised 17-year-old Kristian Kostov with a very mature voice. Moldova's SunStroke Project delivered a fun dance number that generated smiles and dancing, while Belgium's Blanche sang a minimalist song laced with melancholy. Sweden's Robin Bengtsson showed a bit too much polish in his smooth dance number, and the ostensibly unconquerable Italy, which might have won any other year, faced too much stiff competition in 2017. 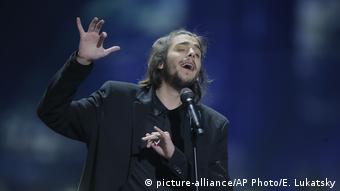 As in previous years, there was much regional voting, with countries frequently awarding their points to neighboring lands. Yet across the continent, many juries awarded their top points to Portugal. Sobral established a lead from the beginning, and was never challenged as the votes came in - first, country by country in the jury voting, and later, when the combined television votes were announced.

Notable in the evening was the disturbance created by a streaker, apparently wearing only an Australian flag and momentarily seen on television disturbing the performance of Ukrainian singer Jamala while the vote tallies were awaited. 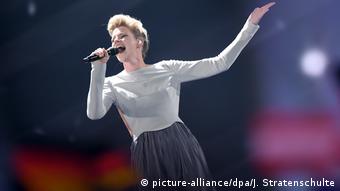 Germany's Levina was very professional but did not stir emotion

With six points, Germany finished second-to-last, followed only by Spain. Levina's performance was solid, yet unemotional, and her song all-too-safe and so calculated to win, that the result was the opposite.

Three of the six points were awarded by the Irish jury, the other three by television audiences.

Altogether, 42 nations vied this time for top honors at the grand final of the world's biggest entertainment show, broadcast to an estimated television audience of 200 million.

Hosted by three young men - Oleksandr Skichko, Timur Miroshnychenko and Volodymyr Ostapchuk - in the kind of English that can be understood across the continent, the show was bare-bones, despite ongoing controversy in Ukraine over the cost of the event.

The effects in the musical productions were of typically high standard, however: a gigantic LED screen creating spellbinding visual spaces, showers of sparks falling from the heights and pyrotechnic columns surging from below.

In Kyiv itself, security was clearly paramount. At the press conference a day before the final, the Ukraine band's frontman thanked "the men who are fighting for our security in the east," reminding visitors that the country is at war. "Freedom is Our Religion" is the message of a huge banner on Maidan Square near the Eurovision fan zone, while a billboard on Independence Square listed nine Ukrainian soldiers killed this month.

In the biggest ESC scandal in memory, Russia boycotted the contest after a controversial ban on its singer, Yulia Samoylova, and both Russia and Ukraine now face EBU sanctions for politicizing the event.

But across the broad Dnipro River in Kyiv's exhibition center seating 9,000, there was only fun, celebration and unity. The world's biggest entertainment show continues its unique blend of quirkiness and glamour, spectacle and sometimes even high musicality with a cross-generational appeal.

4 killed in fighting in eastern Ukraine ahead of ESC final

As the glitz and glamour of Eurovision kicked off in Kyiv, people were being shelled to death in their own homes in eastern Ukraine. Ukrainian President Petro Poroshenko cancelled his appearance at the ESC final. (13.05.2017)

Opinion: And the Eurovision winner is - the music

Often subverted by quirks and campiness, the fest that often seems to revel in bad taste brought in a strong musical lineup this year - and the winner was the undisputed musical favorite, says DW's Rick Fulker. (14.05.2017)