Irish no-frills carrier Ryanair has announced its third-quarter profit has dropped considerably, with a weak British pound being one of the main reasons behind the slump. Full-year guidance was left unchanged. 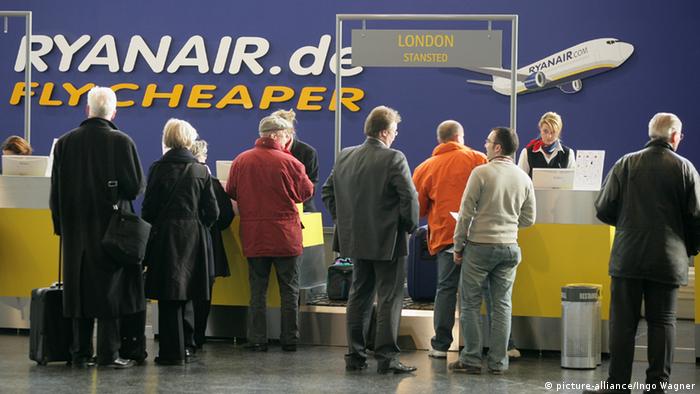 Earnings at Europe's largest carrier by passenger numbers dropped by 8 percent year on year in the third quarter to December 31, the Irish airline reported Monday.

Ryanair said net earnings fell to 95 million euros ($102 million) for the three months to the end of last year, owing to a sharp decline in the value of the pound after Britain's decision to leave the European Union.

"With less than two months of the financial year to go, and no Easter in March, we expect fourth-quarter yields to decline by as much as 15 percent," the company said in a statement.

"Pricing will continue to be challenging; and we will respond to adverse market conditions with strong traffic growth and lower unit costs, Chief Executive Michael O'Leary said.

Ryanair noted that customers would continue to see cheap fares, which were "falling faster than we initially planned."

In October of last year, Ryanair cut its forecast for profit after tax by 5 percent for the full year to March 31, to a range of 1.3 billion to 1.35 billion euros. The carrier said Monday it was maintaining that guidance.

Ryanair: money for nothing and tickets for free?

The head of Europe's largest airline by passenger numbers, Michael O'Leary, has told a German business daily that he has a vision of completely doing away with ticket prices at Ryanair. Sounds good, doesn't it? (31.01.2017)

The main suspect in Germany's most prominent far-right political assassination since World War II has closed his defense in court. He and his alleged accomplice have been linked to the National Socialist Underground.

French university students have protested against the financial and psychological effects of the lockdown. The French president has promised to allow a very limited return to campus.