Russian politician in hospital after assassination attempt | World | Breaking news and perspectives from around the globe | DW | 22.06.2009

The leader of Russia's Ingushetia region is in intensive care following an assasination attempt on Monday morning. 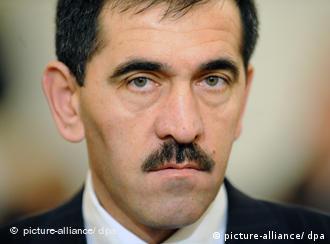 Russian officials say Yunus-Bek Yevkurov, President of the Republic of Ingushetia, was critically wounded in a blast on his cortege, which was said to be travelling outside the Ingush regional center, Nazran.

"An attempt was carried out on the life of president Yevkurov," a spokesman for the leader said. "He is currently in a serious condition."

Russian President, Dmitry Medvedev has condemned the attack on the man he appointed to lead the troubled republic at the end of last year.

"An act of terror has taken place in Ingushetia," Medvedev said in televised comments. "This is of course the work of bandits."

He went on to praise the Ingush leader's efforts to bring calm to the region and "civil order to the republic." He said "the bandits did not like this activity."

An unnamed police official said the explosion was the work of a suicide bomber who drove into the presidential convoy.

The attempt on Yevkurov's life is the latest in a string of high-profile attacks that have killed a former deputy prime minister and a senior judge within the past weeks.

Ingushetia is a predominantly Muslim region, which has been fighting an Islamic insurgency for the past years. Medvedev has promised to fight terrorist activity in the region, and is planning large-scale military anti-terror maneuvers there at the end of June.

With Moscow's attention elsewhere in these days of financial instability, a string of high-profile assassinations in the mainly Muslim provinces of southern Russia is forcing the Kremlin to take notice. (20.06.2009)

Russia has ordered an end to its counterterrorism regime in Chechnya. That could mean the withdrawal of tens of thousands of troops from the republic which has suffered two separatist wars in the past 15 years. (16.04.2009)

A lawyer who fought against the early release of colonel convicted of murdering a Chechen girl was shot and killed in Moscow on Monday, Jan 19. A journalist was also shot at the scene and has died of her wounds. (19.01.2009)