A court closes the last national network, silencing critics of the Putin regime. 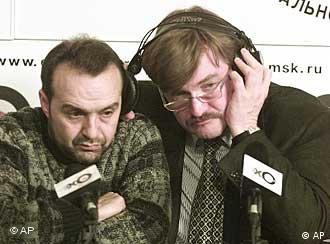 Yevgeny Kiselyov is a journalist and a refugee. Already chased from one independent television network, NTV, when the state forced out the editorial staff, he and many of his colleagues moved to TV-6.

But following a court order on Monday, the TV-6 director and his team of journalists, creators of Russia's broadest, most robust independent news coverage since the end of the Soviet era, were pushed off the air, this time with nowhere else to go.

The demise of TV-6, all but complete unless the station's lawyers win an unlikely court reversal, is the demise of national independent television in Russia.

With advocates of free media warning of resurgent state press control under the government of President Vladimir Putin, Kiselyov and a colleague, satirist Viktor Shenderovich, took to the radio waves to point the finger at Putin.

Though officially the case against TV-6 is a financial one, filed by a minority shareholder, Kiselyov claimed there is a direct political link.

The president's chief of staff offered the station a way out of trouble, he said, if the editorial staff agreed to distance itself from Boris Berezovsky, a wealthy businessman and political enemy of the president who had bankrolled the station.

"We were told, this is your last chance. Take it, or we in the Media Ministry will take you off the air," Kiselyov told Ekho Moskvy, an independent radio station that has championed the right to criticize the government since NTV's closure.

With that alleged carrot rejected, the country's media ministry gave TV-6 the stick at midnight, pulling the plug on a station watched by an estimated 90 percent of Russians.

The Kremlin rejects Kiselyov's claim. The case was filed by Lukoil, the Russian state's closely-controlled oil firm, which owns 15 percent of the station and called for its liquidation in the face TV-6's financial problems.

The shutdown does not kill off independent television altogether in Russia, but the few remaining stations are local or regional, lacking in resources and influence. It leaves a vaccuum on the national stage.

Both NTV and TV-6 were financially controlled by so-called "oligarchs", big businessmen against whom the Putin regime has acted.

The crackdown on illegal business has been welcomed by Russia's critics, but the accompanying stifling of independent journalism has not.

Boris Nemtsov, a former Yeltsin government advisor who now heads the country's Union of Right Forces, warned that if TV-6's shutdown is not reversed "we will only be able to speak about free speech in this country in quotation marks," Reuters reported.

What will become of Kiselyov's efforts to report objectively on government policy, including the controversial war in Chechnya, if the station can win a chance at arbitration, will be up to another judicial body.