Two members of the Russian punk band Pussy Riot are doing time in remote labor camps, which may become home to many more opposition members. Former inmate Svetlana Bakhmina spoke to DW about life in the camps. 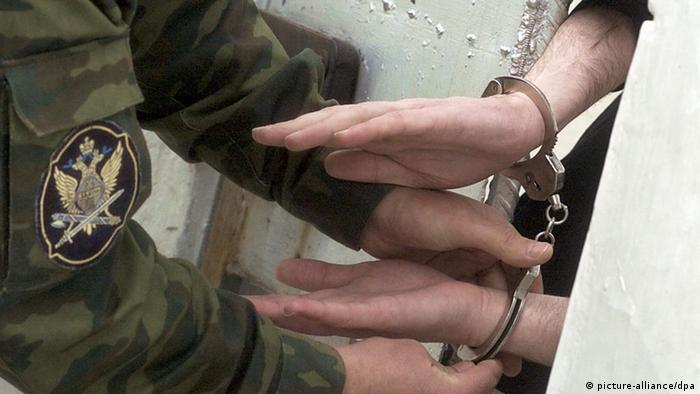 Svetlana Bakhmina has a sense of how Pussy Riot members Nadezhda Tolokonnikova and Maria Alyokhina feel since the two young women were transported to remote labor camps to serve two-year prison terms for their "punk prayer" against President Vladimir Putin in Christ the Savior Cathedral in Moscow. Their convictions for hooliganism took Tolokonnikova to a camp in Mordovia, some 400 kilometers (250 miles) from Moscow and Alyokhina to the province of Perm, 1,200 kilometers northeast of the Russian capital.

"It is a depressing place," said Bakhmina of Mordovia.

Bakhmina knows from experience what it's like. She spent two and a half years there on charges of fraud and tax evasion. She has written a letter to Tolonnikova to express her support.

"The sky there is lead grey. I also arrived in October, on the same day as Nadezhda," she told DW. "The sky is grey, the wall around it is grey, just as all those women in their jackets and with their grey scarves," she added, referring to a photo published by Russian daily Izvestia that showed Tolokonnikova wearing a grey headscarf and green jacket during a walk with other inmates at the Mordovia camp.

Bakhmina was 37 when, back in 2006, she arrived in colony No. 14, literally a place in the middle of nowhere, surrounded by endless forests and swamps. Before her arrest in 2004, she worked as a lawyer for the oil company Yukos, one of Russia's biggest oil companies, which had been owned by billionaire Mikhail Khodorkovsky. He had been arrested a year earlier and was later sentenced to a 13-year term in a penal colony for alleged theft and tax evasion after two politically charged trials.

Bakhmina was one of several other Yukos officials prosecuted in cases that, like that of Khodorkovsky, were regarded by many inside and outside Russia as politically motivated.

After her trial and conviction, Bakhmina was left in the dark as to what would happen to her next.

"On a Friday morning I met my lawyer, then after lunch they told me I had half an hour to pack my things," she said "I got in a car, the car brought me to the station, and I was put on a train. But where I was going was completely unclear." 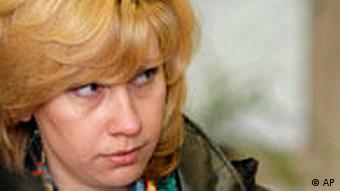 Bakhmina was a lawyer for Yukos when she was arrested

The destination turned out to be the village of Partsa, where two labor camps are located. They belong to a string of camps that were once part of the Gulag, the system of labor camps that has existed in the Soviet Union since the 1920s.

Bakhmina was assigned to colony No. 14, where the women work in brigades. They got out of bed at six in the morning. During the day they had to sew uniforms for the police or fire brigade, clean the area or unload coal. Using the bathhouse was only allowed once a week, the food was bad and the garments the inmates had to wear were inadequate to protect against cold or heat, Bakhmina said. To survive life in the camp and return to society in a more or less normal state required patience and hard work.

Stick to the rules and don't be afraid

"'Don't believe,' because everything there is not what it seems. [As] a rule you should not trust anyone, because all too often you are deceived. 'Don't fear' is also important, because showing your weakness to both inmates and the camp administration may have sad consequences. And 'don't ask', because it is very important that people around you know there are others waiting for you, supporting you, sending you things. That gives you a certain authority, which is important and makes life easier," she said.

"You must stick to the rules, no matter how stupid they may be," she added. "You must always remember that the main goal is to get back home, to your family, as soon as possible."

One of the challenges was to stay healthy and not fall ill, Bakhmina said, adding that it was a difficult task; due to bad food, cold and stress, many inmates have one or more diseases.

Bakhmina said there were some 200 women infected with HIV, often drug-related, in the her penal colony alone. Tuberculosis was also a problem, while medical care was basic at best. 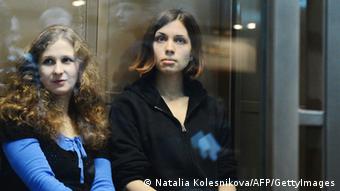 Outside support could be crucial for Alyokhina (left) and Tolokonnikova

"It is very difficult to recover, once you get ill," she said. "It is very difficult to get any treatment, because they think you simulate that you are ill to escape work. They believe you only when you have high fever. Specialists, like gynecologists, only rarely visit the colony. Everybody has bad teeth. I have seen young girls without teeth."

Bakhmina recalled a girl who was HIV-positive and very ill. She was released, only to die three days later. "They did not want her to die in the camp, because that would spoil the statistics," she said.

Life in Mordovia sometimes brought her close to depression.

"But I always told myself: Life goes on. This is only a small part of your life. It is a shame to waste this time, but there were a lot of good things before, and a lot of good things will follow. Therefore one must survive and try to do it with as little harm as possible. No matter how insulting it is that they have convicted you unlawfully.

"That is very difficult, for in Russia you do not just lose your freedom, but you have to suffer lots of other additional humiliations, threats to your health, etc. Losing your freedom is only the lesser evil."

That is a lesson she learned immediately upon arrival: She was put in solitary confinement, because the camp administration allegedly found a phone card in her luggage.

"They accused me of all kinds of violations," recalled Bakhmina. "It brought me to the verge of hysteria. 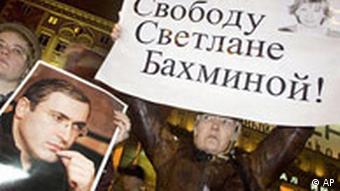 Bakhmina was sentenced to four years in a labor camp

"In the camp you are completely defenseless, in the power of people who can do anything with you. Here you understand that you are nobody, not a human, but a mere unit. It helped that in my case, as in Nadezhda's, there was support from outside, from lawyers and family, which meant they would not beat me.

"If you do not have that support, if you come from somewhere in the province, they will shout at you or beat you up. You have absolutely no rights and complaining is useless, because you do not even know whether your complaint ever leaves the camp, since all letters are censored. If you complain, they may punish you for it and you can forget your chances of an early release."

The two convicted Pussy Riot members may apply for early release once they have served half of their sentences. However, whether that will be granted does not necessarily depend on their behavior in the camp, according to Bakhmina.

"It all depends on the camp administration. They can invent all kinds of violations, to prevent the judge from releasing you, even if you have shown ideal behavior."

Bakhmina was released in April 2009, following an international campaign to set her free.

Under pressure from her parliament to criticize President Vladimir Putin's civil rights record, Angela Merkel has touched down in Moscow Friday for German-Russian talks. That criticism has been rebuffed by the Kremlin. (16.11.2012)

Was Pussy Riot's punk prayer in a cathedral blasphemy, or a courageous political protest? And does the band deserve a prestigious German award? The question has led to heated debate among theologians and politicians. (09.11.2012)