Russian-European relations are at a historic low. But no bad blood was felt at Russia Day in the German state of Mecklenburg-Western Pomerania - mostly because former Chancellor Gerhard Schröder was there. 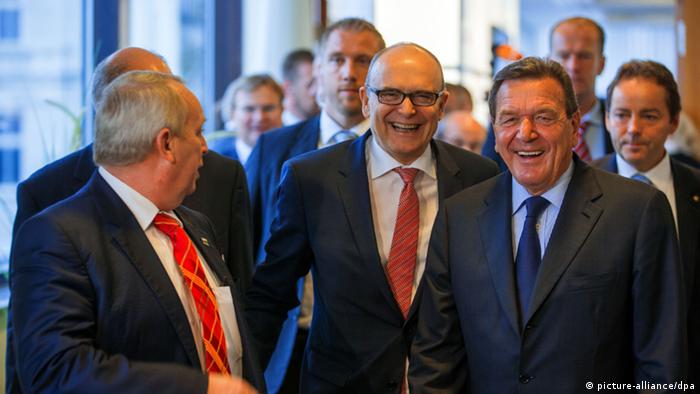 The northern Germans are famous for not easily getting worked up. This reputation may help explain why no one in the state government of Mecklenburg-Western Pomerania ever questioned hosting a Russia Day despite massive criticism. Quite the contrary, in fact.

Despite weeks of appeals from Germany's Christian Democrats and the Green Party to cancel the event amid an armed conflict in Ukraine and European sanctions against Moscow, the state's governor, Erwin Sellering, a Social Democrat, insisted that the economic summit in Rostock-Warnemünde could, especially in difficult times, "make a modest contribution to mutual understanding."

"We won't be able to solve any foreign policy conflicts here today," Sellering said more than once.

Gerhard Schröder, the former German Chancellor, shares this view. Schröder appeared as the keynote speaker in Warnemünde and began by thanking Sellering for "standing firm" and not letting himself be influenced "like a leaf in the wind."

"I am firmly convinced that this event is right to happen and that it is doing so at the perfect moment," said the Social Democrat, who is also close friends with Russian President Vladimir Putin and who was quick to take a board position after his political career at Nordstream AG, which delivers Russian gas to Germany.

"Dialogue is more necessary in tough times than ever," Schröder said.

The former chancellor added that his stance had nothing to do with a reluctance to criticize. He said he was proud to be a "Russia whisperer" of sorts, noting that Russia had felt threatened by the West since Napoleon reigned. Germany's business community must keep this in mind.

"Dialogue means, more than anything, that you try to take different interests into consideration, build trust that has been lost and find compromises," Schröder said.

But what would such a compromise look like? One point that was made repeatedly in Warnemünde during lectures and conversations was that the economy should take center stage. 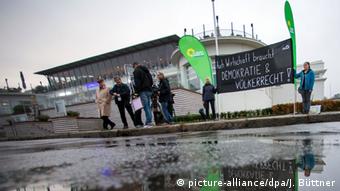 "Mutual sanctions hurt both sides immensely," Schröder said. "So I would urge both Russian and European politicians to find their way out of this spiral of increasingly harsh economic sanctions."

It was unfortunate that a new round of sanctions was enacted after a ceasefire was agreed upon in Minsk, he added.

"My advice would have been different," Schröder said.

Schröder also emphasized the importance of economic integration with Russia, with which Europe has common interests.

"We would be well advised to expand our energy and raw materials partnership - not only because Russia has been, is and will be a reliable supplier, but also because German industry existentially depends on these raw materials, and I'm not only talking about oil and gas," Schröder said.

Mecklenburg-Western Pomerania also has a "vital interest" in having good economic relations with Russia, Erwin Sellering, the state's governor said. In the past year, goods worth 636.9 million euros ($804 million) were exported and imported to and from Russia. Half of that sum was from imports of petroleum, natural gas and fertilizer.

In return, the German state exported iron and other metal products, cheese and vegetables. This put Russia in fourth place of the state's most important foreign trading partners in 2013. In the first six months of 2014, it crept up to second place in the same ranking.

Overall, more than a hundred companies from Mecklenburg-Western Pomerania entertain foreign trade ties with Russia. But that's not all. A number of important companies in the northern German state now have Russian owners, including the Nordic shipyards in Wismar, Warnemünde and Stralsund, as well as the wood company Illim Timber in Wismar.

Then there's the town of Lubmin, where the Baltic Sea pipeline, Nordstream, reaches Germany with its supply of Russian gas.

"Every job is important," said Claus Ruhe Madsen, the Chamber of Commerce president in Rostock. "Many representatives of local companies have encouraged us over the past months with respect to the importance of Russia Day as a symbol of the continuing stability of our growing economic ties."

Many of these companies have also come to Warnemünde for Russia Day. The organizers, the state government, Wismar's Ostinstitut and Mecklenburg's three Chambers of Commerce had expected 250 participants. In the end, there were 400 who signed up - a quarter of them Russian.

Appeal of the Russian ambassador

The Russian ambassador to Germany, Vladimir Grinin, used his appearance in Warnemünde to warn about a further decline in economic relations between Germany and Russia. Goods sales declined in the first half of 2014 by 6.5 percent, he said. German exports were the hardest hit - they sank 20 percent month-on-month in July. 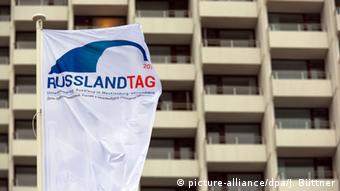 Closer cooperation was seen as a prerequisite for free trade

Exports could sink 25 percent for the whole year, analysts believe. The biggest problem is the loss of mutual trust, Grinin said.

"Restoring this is much stronger than simply treating the economic wounds," Grinin said.

Free trade from Lisbon to Vladivostok

The EU should have recognized years ago that it had to include Russia in negotiations over an association agreement with Ukraine, Schröder criticized.

"We need such an association with Russia and the EU to ensure peace, stability and prosperity on the entire Continent and to solve all controversies, problems and conflicts relating to international law cooperatively instead of confrontationally," Schröder said.

Only then can a free trade zone be established that reaches from Lisbon to Vladivostok, he added. If all that fails, the former chancellor is sure that Russia will seek its future in Asia rather than Europe.