A quarter century after the August Coup, Dmitry Bykov, one of Russia's most famous intellectuals, journalists and opposition figures reflects on the days that effectively led to the end of the Soviet Union. 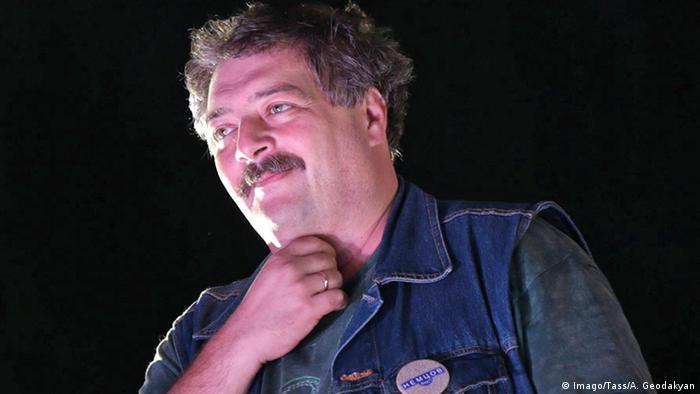 On August 19, 1991, eight high-ranking Soviet officials declared a state of emergency. The coup plotters aimed to save the Soviet Union and to turn back the clock on Soviet leader Mikhail Gorbachev's reform program.

They placed Gorbachev under house arrest at his holiday dacha in Crimea and sent tanks to Moscow to storm the White House, which housed the Supreme Soviet, or parliament, of Russia, the largest and most influential of the Soviet Union's 15 republics.

Thousands of people took to the streets to defend their newly found freedoms. Boris Yeltsin, who had recently been elected Russia's first president, addressed them from a tank outside the White House, condemning the coup as illegal. On August 21, the coup plotters pulled the troops and tanks out of the capital. Most of them were arrested the next day. The Soviet Union dissolved four months later.

Dmitry Bykov was out on the streets of Moscow at the time. He is one of Russia's most famous intellectuals - a journalist, writer and critic of Vladimir Putin's regime.

DW: How did you find out what was happening?

Dmitry Bykov: I was spending the summer in Tallinn with my first wife - my fiancée at the time. One of my friends woke us up. We were usually hard to wake up. He shouted through the door: "Gorbachev has been dismissed - there are tanks in Moscow!" We decided that that was certainly reason enough to get up.

By some miracle we managed to buy tickets to Moscow. We had a huge watermelon with us. And we ate it in the airplane, thinking it could be the last watermelon we would eat in our life.

In the center of Moscow we saw that huge crowds were making their way to the White House with banners and flags. Opposition to the coup was already starting to form then. 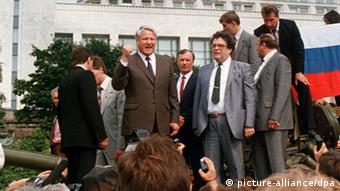 That night we went to keep watch outside the White House. We saw so many people we knew. I heard Yeltsin's speech from the tank. We spent the whole night there. Everyone was saying the tanks are going to roll in. We formed a chain by linking arms so that they wouldn't be able get through. If the tanks had actually stormed the White House, they would have run everyone over. We knew that. But I didn't feel any sense of panic.

I felt hopeful because I saw that people were united, well-organized and well-meaning. The crowd there was wonderful. There weren't any incidents, any fights, any brawls. There was a sense of victory, right from the beginning. And there was a sense that what was happening couldn't be reversed.

But my mood was mixed. I understood perfectly that there wouldn't be any radical change. The people on the streets hadn't actually changed. They had simply experienced a sort of national inspiration for three days. But the next step would have to be going back to the [political] drawing board in a big way. And I didn't feel that people were ready for that.

Has the way you see the events of the August Coup changed after 25 years?

No. I've understood since then that the point of those events wasn't to liberate Russia. No country can ever be totally free - not Russia, not Germany, not anywhere. But there can be several hours when the whole population is inspired. The whole thing was worth it just for that.

After all, what consequences could we have expected at the time? The only consequence was that the Soviet Union collapsed. But objectively speaking, it was dissolving anyway - the process was just sped up [by the events of the coup]. And to think that Yeltsin could have managed to build a free Russia on his first attempt - even optimists couldn't have hoped for that.

Were there similar moments of 'inspiration' for Russia after 1991? 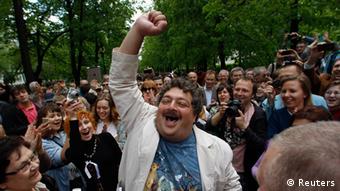 Dmitry Bykov has been an active figure in Russian opposition protests

There were, at least for me. I had some sense of delight when [opposition politician and anti-corruption blogger Aleksei] Navalny nearly got a second round [in the 2013 Moscow mayoral elections] and won nearly 30% of votes in the first round. It was a happy moment. There will be more moments like that in the near future. I don't just feel the past radiating into the present. I can also feel some radiation from the future.

Will that Russian future be democratic?

It will definitely be something more democratic than we have in Russia today. I can't tell you what it will be exactly. For the moment we can see one thing: The current regime is making more and more moves that are self-destructive. It is doing more and more stupid things. And it's hard not to be happy about that.

Dmitry Bykov is a prolific journalist, who works at media outlets including the newspapers Sobesednik, Novaya Gazeta and the radio station Ekho Moskvy. He has written a bestselling biography of Boris Pasternak and several successful novels. He is also known as a vocal figure in the Russian opposition. His "Citizen Poet" project, which brazenly makes fun of Russian politics in verse, has been watched millions of times online.

Putin shakes things up in the Kremlin

On the 25th anniversary of the 1991 coup, Fiona Clark takes a look at what might be prompting Russian President Vladimir Putin’s shuffling of positions within the Kremlin walls. (20.08.2016)