Russia has defended its planned delivery of advanced anti-aircraft missiles to the Syrian regime, a day after the EU lifted its arms embargo against rebel groups. Israel has threatened to stop the missile deliveries. 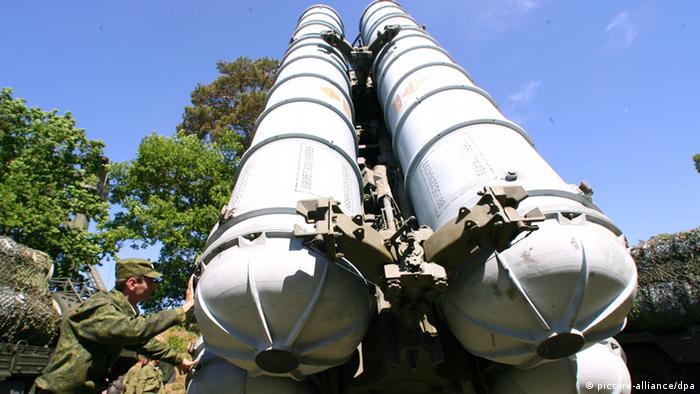 "We think this delivery is a stabilizing factor and that such steps in many ways restrain some hotheads…from exploring scenarios in which this conflict could be given an international character with participation of outside forces, to whom this idea is not foreign," Ryabkov said.

He would not confirm whether the missile system had already been delivered to Damascus, but said that Russia "will not disavow" such weapons transfers. The S-300 has a range of up to 200 kilometers (125 miles) and can strike multiple aircraft and missiles at the same time.

"We understand the concerns and signals sent to us from different capitals," Ryabkov said. "We have no reason to revise our stance."

The United States accused Moscow of delivering anti-ship missiles to the Assad regime earlier this month. Russia has also beefed up its naval presence in the Mediterranean.

Israel's defense minister, Moshe Yaalon, told reporters on Tuesday that the S-300s had not been delivered to Syria yet. But he said that Israel would consider the missiles a potential national security threat.

"I hope that they [missiles] will not be sent," Yaalon said. "If God forbid they do reach Syria, we will know what to do."

In early May, Israel reportedly launched airstrikes in Syria to stop Iranian missiles from falling into the hands of the Shiite Hezbollah organization in Lebanon.

The European Union, led by France and Great Britain, has decided to lift its arms embargo on the Syrian opposition. Economic sanctions, however, still remain. (28.05.2013)

The Syrian government said the EU was providing "support and encouragement to terrorists by providing them with weapons in clear violation of international law and the UN charter."

The EU's decision, a contentious one within the 27-member bloc, would allow national governments to deliver weapons to the rebels on an individual basis, but stopped short of allowing arms transfers in the EU's name.

France and the United Kingdom had long called for the arms embargo to be lifted for groups that want to overthrow President Assad. But British Foreign Minister William Hague said that London had not yet decided whether to arm Syrian rebels.

"While it is ultimately an EU decision, we do support the easing of the EU arms embargo as a part of the international community's efforts to demonstrate its full support for the Syrian opposition," Ventrell said.

But White House spokesman Jay Carney said that the Obama administration was still against sending US weapons to the rebels.