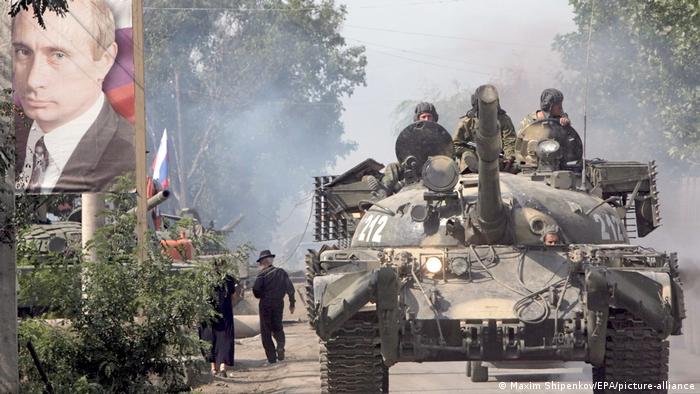 Russia's 2008 routing of Georgian troops from South Ossetia and its occupation of Abkhazia, and likewise, Ukraine's Maidan protests of 2013-2014, had culminated in "state" abuses, ruled the European Court of Human Rights (ECHR) in twin rulings.

Guided by the 1950 European Convention on Human Rights, the Strasbourg-based judges found Thursday that Russia —as occupier of the breakaway Georgian regions in 2008 — was responsible for "inhuman and degrading" treatment of detainees.

They also found that in late-2013 and early 2014, Ukrainian forces under pro-Russian then-president Viktor Yanukovych had used "excessive violence" to suppress initially peaceful protests, the court found — in one case, the torture and murder of a protestor left to freeze to death in a forest.

The ECHR ruled that Georgia's complaint to the court was only applicable in the aftermath of Russia's ouster of Georgian forces and occupation of South Ossetia and Abkhazia, not during warfare.

Russian had later held control over the separatist regions, said the ECHR, and was responsible for ill-treatment and acts of torture against Georgian prisoners of war.

This included, said the ECHR, the "inhuman and degrading treatment" of 160 detained Georgian civilians. They were held in crowded confinement for more than two weeks in August 2008.

The ECHR said Moscow had had an obligation "to carry out an adequate and effective investigation" into those events.

Georgia's current Prime Minister Giorgi Gakharia described Thursday's ECHR verdict as a "victory," given that Tbilisi had pursued the case.

In its separate ruling Thursday on Ukraine's pro-Western Maidan demonstrations of late-2013, early 2014, the ECHR found the Yanukovych's forces had used "excessive violence and unlawful detention."

Yanukovych fled Ukraine later in 2014, into exile in Russia.

In five cases brought by 38 mostly Ukrainian plaintiffs who protested at the time, the UCHR found that the post-Yanukovych Ukraine had yet to pay compensation to some of the applicants.

Protestor Yury Verbytskyy, 50, froze to death in January 2014 after being abducted from hospital, being tortured, and then left in a forest outside Kyiv.

The court found there had been "a failure to conduct an effective investigation" into his abduction, ill-treatment and death.

In many cases, said the court, the [Ukrainian] "state had failed to investigate the alleged abuses adequately or with sufficient expedience."

One applicant had testified to having his head stood on, while another was beaten in a courtyard for "several hours," the court said. Some complainants had endured "traumatic" injuries.

The court reiterated the right to freedom of assembly and said excessive force used against Maidan protesters had resulted in an "escalation of violence."

There was "no information" that the protesters in their original aim of "obstructive, but peaceful" action intended to let it degenerate into violence, the court observed.

Over the course of the Maidan protests — in reaction to a suspension of a Ukraine-EU association agreement — some 200 people were killed, including 20 police officers.

Russia rejected Monday an EU proposal to end the conflict with Georgia over South Ossetia and Abkhazia. Georgia continues to use military force, making a deal impossible, a Kremlin spokesman told reporters.

German Foreign Minister Frank-Walter Steinmeier has called for an international probe into the conflict over Georgia's breakaway provinces in an interview published Friday.