With hundreds of thousands of Russians dying of excessive drinking every year, the Kremlin says it plans to hike minimum prices for strong spirits, including vodka. But the move may not yield the desired effect. 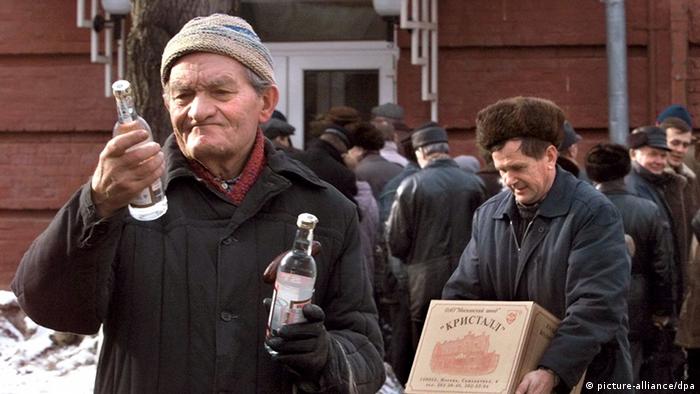 According to a draft decree published by the government on Friday, Russia looked set to once again raise minimum vodka prices as of next year, with consumers having to spend about a fifth more for the same quantity from January 2014.

The document said the cheapest half-liter bottle of vodka would then cost 199 rubles ($6, 4.42 euros), up from the current 170 rubles.

It also noted the price for strong spirits would further rise to 220 rubles per half liter from August 2014, bringing total increases next year to almost 30 percent.

Alcoholism was estimated to contribute to 30 percent of deaths in the nation of 143 million inhabitants, medical surveys indicated.

The Kremlin had already been tightening regulations for producers of vodka and beer such as Russia's Synergy or Danish brewer Carlsberg. It had banned alcohol advertizing, raised excise taxes and banned sales after 11 p.m.

An earlier round of price hikes in 2010 has already affected store sales, but even higher prices could easily lead Russians to resort more often to bootleg spirits, which can be fatal if not distilled properly.

Official sources in Iran say 200,000 people are dependent on alcohol. This figure is likely to be higher, however, because the rulers of the Islamic Republic are reluctant to admit the existence of social ills. (27.05.2013)

After a series of alcohol poisonings, the Czech Republic had banned the sale of hard liquor. Now, Czech officials want the ban to be lifted. Neighboring Poland and Slovakia also imposed a ban on Czech-made-alcohol. (19.09.2012)

The Czech Republic has banned the sale of hard alcohol after a series of fatalities linked to vodka or rum spiked with methanol. The drinks have been involved in the deaths of at least 19 people. (14.09.2012)