A Russian broadcaster has refused a Eurovision offer for song contest entrant Yulia Samoylova to appear by satellite link in the Ukraine-staged final, calling it "peculiar." The singer had been barred entry to Ukraine. 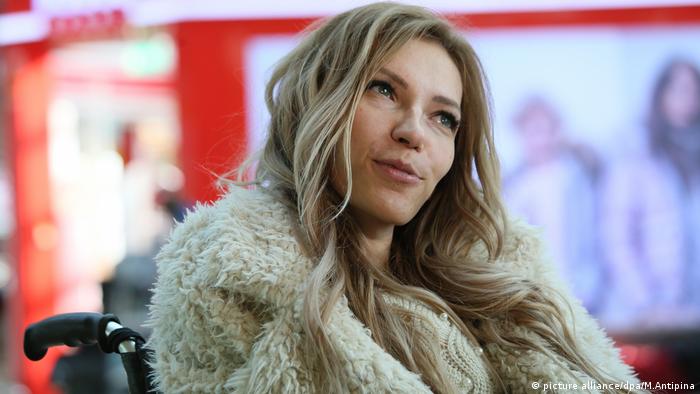 Russia's state-run broadcaster Channel One on Thursday poured scorn on the idea of its contestant competing via a remote satellite link.

The song contest in Kyiv comprises two semi-finals on May 9 and 11, with a final on May 13.

Ukraine has barred Russia's Eurovision contestant from entering the country because she previously performed in Crimea. Relations between the neighbors have deteriorated since Moscow's 2014 annexation of the territory. (22.03.2017)

Russia has irked host country Ukraine with its Eurovision candidate. The disabled singer is now under investigation. Will Russia boycott the song contest after all? (13.03.2017)

The EBU, which runs Eurovision, voiced its deep disappointment about Kyiv's decision. In a DW interview, EBU Senior Communication Officer Dave Goodman said that his organization respected the laws of the host country but was still trying "to talk to the Ukrainian authorities and to make the case that this is a non-political, inclusive event."

If Samoylova is not permitted to perform on-site at the event, the EBU's unusual offer of a remote live broadcast to the final in Kyiv would allow the singer to represent Russia in the competition.

Channel One Russia rejected the idea, claiming that Samoylova performing via a remote link would be strange, given that live performances are a prerequisite for entrants.

"We find the offer of remote participation odd and refuse it, for it is going absolutely against the very essence of the event, one of the rules of which reads that the song should be performed live on the stage," Channel One said in an English-language statement spurning the offer.

In response, Goodman said, the EBU would probably have to ask Russia to reconsider. The organizers "will exhaust every option with the Ukrainian authorities before we have to use that option, but the offer will always stay on the table. Therefore, it will be up to Channel One Russia to accept that or not."

Russian state media reacted with indignation to the entry ban for Samoylova, who has been in a wheelchair since childhood after a bad reaction to a vaccine.

The popular tabloid "Komsomolskaya Pravda" headlined its Thursday paper "Eurohate," and said the ban was "spitting in the face of defenseless" Samoylova.

The Russian singer said she could not understand why Ukrainian authorities saw "some kind of threat in a little girl like me."

Ukraine imposed the entry ban on Samoylova because she was said to have illegally entered the Moscow-annexed Crimean peninsula to perform in a 2015 gala concert. Kyiv considers any entry to Crimea by non-Ukrainians to be an affront unless they are first granted permission.

The status of Crimea is a particularly sensitive issue in Ukraine since it was annexed by Russia in 2014.

In the end, Goodman thinks that "when the music begins, when the competition begins, a lot of this will be forgotten and people will concentrate on what they should be focusing on and that is the competition itself." It is, however, doubtful the political drama centered around a disabled artist will simply be forgotten by the time the contest starts.

My picture of the week | Russian Eurovision nominee banned from Ukraine