Ukrainian director Oleg Sentsov has been on hunger strike in a Russian jail for more than three months. Now the Kremlin has rejected his mother's request for clemency, and said Sentsov should request the pardon himself. 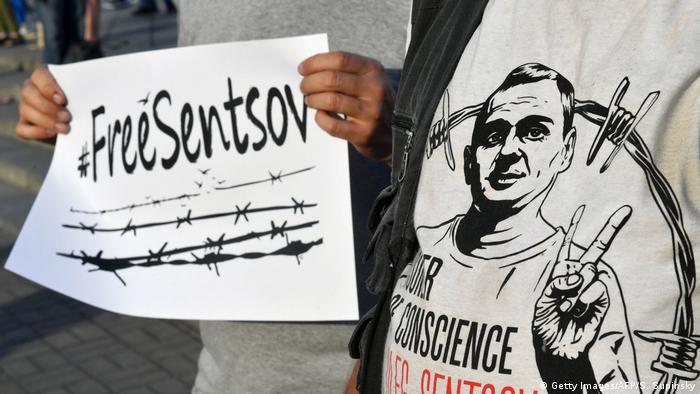 "The pardon procedure begins with the personal request of the convict," said a letter from the Kremlin to Ukrainian filmmaker Oleg Sentsov's mother.

Published on the website Hromadske.ua on Wednesday, the letter to Lyudmila Sentsov rejected her request for a pardon for her son, who in August 2015 was sentenced to 20 years in a Russian jail north of the Arctic Circle.

Sentsov was found guilty of having formed a terrorist group, and planning attacks in the Russian-annexed Crimea region of Ukraine in the spring of 2014. Sentsov denies the accusations, which have been widely condemned internationally.

His mother had written to Russian President Vladimir Putin at the end of June pleading for her son's release but she was told that pardons can only be considered if made by the prisoner.

Sentsov has been on hunger strike since May 17, having demanded the release of all Ukrainian political prisoners in Russia before he would eat again. His cousin Natalia Kaplin says he has lost more than 30 kilograms (66 pounds) and his life is in grave danger.

Ukrainian director Sergei Loznitsa told DW that Sentsov's jailing is an "act of gross injustice" that is impossible to tolerate.

When Sentsov began his hunger strike, Loznitsa — along with Nobel Prize winners Herta Müller, Svetlana Alexijewitsch and other signatories — wrote an open letter to German Chancellor Angela Merkel and Foreign Minister Heiko Maas urging them to "to do everything possible" to save Sentsov's life.

On Monday, more than 100 other international filmmakers and artists wrote a new appeal which was published in the French daily Le Monde.

"To do nothing would be to let Oleg Sentsov die,” they wrote.

Earlier, French President Emmanuel Macron called Putin to urge a "humanitarian solution” to secure the release of the 42-year-old filmmaker.

Russian human rights activist and journalist Soya Svetova was allowed to visit Sentsov on Tuesday, at the infirmary of the Russian penal colony Labytnangi, the Russian newspaper Novaya Gazeta reported.

According to her, Sentsov's health is critical, but still he still wants to continue his hunger strike. Sentsov's lawyer, Dmitri Dinse, has said his client was prepared to die in jail.

Loznitsa, who met Sentsov briefly at several film festivals, told DW: "When one is in such a state, the body becomes the last means of resistance."

Loznitsa often deals with the political conditions in Russia and Ukraine. In 2014 he published "Maidan," a documentary about the Ukrainian uprising on the square of the same name in the capital, Kyiv. His last film, "Donbass," shows the effects of the hybrid war between Russian-backed separatists and Ukrainian government troops, in which peace and truth blur beyond recognition.

Dombass was awarded the prize for "Un certain regard” at this year's Cannes Film Festival.

Loznitsa told DW the injustice surrounding Sentsov's case couldn't be overstated: "Imagine that you've been caught in the street, sentenced without any reason, put in the harshest prison conditions and it's quite possible that you won't have the chance to ever get out of there. If you imagine this, it would become obvious to you, why Oleg decided to go on hunger strike.”

Loznitsa said it was also important to draw attention to other political prisoners as Sentsov is not the only one currently on hunger strike in Russia.

Despite Moscow leaving open a personal request for clemency, his cousin Natalia Kaplan told the Ukrainian TV station Hromadske she thinks the director "will certainly not write a petition for pardon."

Oleg Sentsov, the Ukrainian filmmaker on a hunger strike in a Russian prison, debuted with a film that was shown at prestigious international festivals. (10.08.2018)