Lyubov Sobol is the latest opposition figure associated with Alexei Navalny to have been placed on the police's wanted list. She and several other allies of the Kremlin critic have fled Russia. 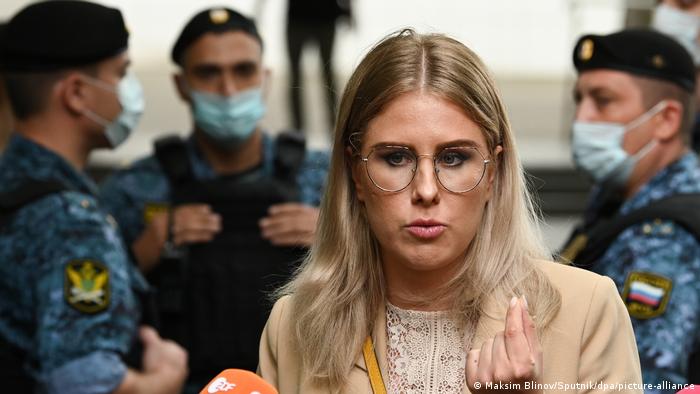 Lyubov Sobol, a prominent ally of Kremlin critic and opposition politician Alexie Navalny, has been placed on a wanted list in Russia, according to multiple media reports on Wednesday.

The 34-year-old lawyer, who left the country earlier this year, appeared on the list on the website of Russia's Interior Ministry on Wednesday night.

She commented on the reports of her being placed on the list, saying authorities seemed to have used a photo of her from when she was on a  hunger strike.

The entry in the ministry's database stated that she was "wanted under an article of the criminal code," but did not provide further details, according to news website Meduza.

Who is Lyubov Sobol?

Sobol, a key figure in Navalny's Anti-Corruption Foundation, rose to prominence in 2019 when she went on a hunger strike to protest being barred from participating in local elections.

The opposition politician was one of the most well-known faces of Navalny's entourage.

She reportedly fled Russia in August, days after she was sentenced to parole-like restriction amid a crackdown on the opposition.

Sobol was sentenced to a year and half of restricted movement for flouting COVID-19 regulations on protest — a charge she had called political-motivated.

Other people critical of Russian President Vladimir Putin also feature on the most wanted list.

This includes Ivan Zhdanov, the head of the Anti-Corruption Foundation, and Leonid Volkov, the opposition politician's right-hand man, both of whom are on a wanted list.

Most of Navalny's allies have left the country amid what is seen as an unprecedented crackdown on dissent in post-Soviet Russia.

Navalny was arrested in January after he returned from receiving medical treatment in Germany following a poisoning attack that nearly killed him.

The 45-year-old politician is currently serving a two-and-half-year prison sentence on embezzlement charges in a penal colony outside Moscow.