Supporters of Alexei Navalny rallied in Moscow and St. Petersburg after a court sentenced the Kremlin critic to prison. A massive police presence has been deployed to deal with the protesters. 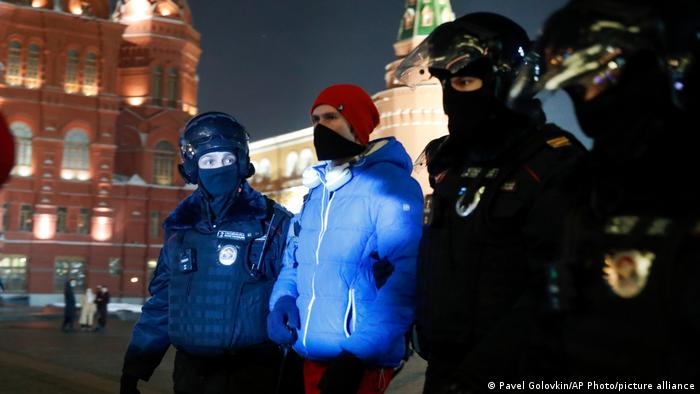 Over 700 pro-Navalny protesters were arrested in Moscow

Police cracked down on demonstrators in Moscow on Tuesday after a court in the Russian capital sentenced opposition leader Alexei Navalny to 3 1/2 years in prison.

Due to time already served under house arrest, however, the Kremlin critic is expected to spend just two years and eight months behind bars.

Allies of Navalny called for protests against the prison sentence in central Moscow. Navalny supporters previously rallied near the courthouse where Navalny received his sentence.

Russian authorities arrested more than 1,400 people at various rallies across the country, according to the OVD-Info monitoring group. In Moscow alone, police detained over 1,000 protesters, the organization reported, while in St. Petersburg there were 248 arrests.

Around 20 people were taken into custody near St. Petersburg's Gotiny Dvor metro (or subway) station in the central part of the city, according to Russian alternative media outlet MediaZona.

A massive police presence was deployed to deal with the demonstrators in Moscow's Manezhnaya Square, captured in a video shared by DW's Moscow correspondent Emily Sherwin.

According to a tweet from the Belarus Free Theatre group, Russian riot police shot down drones to prevent footage being released that showed the scale of the demonstrations.

Russian prosecutors have accused Navalny of violating the probation conditions of a 2014 money-laundering conviction.

Navalny has alleged that the trial is a politically-motivated attempt to silence him, with the real motivation being his criticism of Russian President Vladimir Putin.

Navalny's lawyers have pledged to appeal the decision. His legal team also plans to turn to the European Court of Human Rights over the ruling.

Russia hits back at calls for release

Russia has criticized western countries such as Germany and the United States after they called for Navalny's release.

"There is no need to interfere in the internal affairs of a sovereign state," Russian Foreign Ministry spokeswoman Maria Zakharova said, characterizing "appeals from western colleagues" as "disconnected from reality."

As Moscow calls up reservists, Ukraine's president has urged Russian soldiers to surrender, saying they'll be treated well and won't be forced to return home. Meanwhile, hundreds of people voicing their anger over the call-up have been arrested across Russia.

Russia cracks down on protests against mobilization 21.09.2022

Across Russia, more than 1,000 people have been detained for protesting against Vladimir Putin's announcement of a partial mobilization. Others, meanwhile, have opted to leave the country.