Russia's Defense Ministry is probing whether an airstrike in Syria killed Islamic State head Abu Bakr al-Baghdadi in late May. The strike targeted a meeting of IS leaders that Baghdadi reportedly attended. 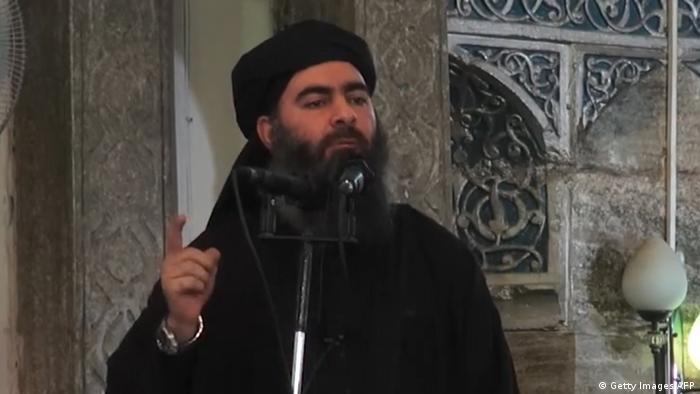 On Friday, Russia's Defense Ministry announced that it is trying to verify whether an airstrike in the Syrian city of Raqqa killed the leader of the self-proclaimed "Islamic State" (IS) group, Russian news agencies reported.

The strike targeted a meeting of IS leaders and was carried out on May 28, Russian news agency TASS reported, adding that the militant group's leader Abu Bakr al-Baghdadi was likely in attendance.

"According to information, which is being verified via different channels, the meeting was also attended by the IS leader Ibrahim Abu Bakr al-Baghdadi, who was eliminated in the strike," TASS cited the ministry as saying.

The news agency Sputnik quoted the ministry as saying that the strike killed "high-ranking commanders of the so-called IS military council" as well as 30 mid-level militant leaders and around 300 other fighters. According to the ministry, the strike came as IS leaders met to discuss the group's withdrawal from Raqqa, the group's de facto capital and the scene of its most gruesome atrocities.

Russian officials emphasized that it was still unclear if the strike killed Baghdadi along with the other IS leaders.

"So far, I have no 100 percent confirmation of this information yet," Russian Foreign Minister Sergei Lavrov told reporters.

The US-led coalition fighting IS said it could not confirm the Russian report that Baghdadi may have been killed.

If the reports are verified, Baghdadi's death would be a major military success for Russia, which has been carrying out a military campaign in support of Syrian President Bashar al-Assad since September 2015.

The Iraqi-born IS leader has not been seen in public since proclaiming himself "caliph" three years ago in the Iraqi city of Mosul. Baghdadi, one of the world's most-wanted men, has been reported to be wounded or killed a number of times in the past.