Russia hits out at 'hysteria' over Navalny poisoning

"Disinformation" and "hysteria" over the poisoning of opposition politician Navalny are being used to justify sanctions, Russia claims. Berlin and Moscow are on a collision course over verifying the test results. 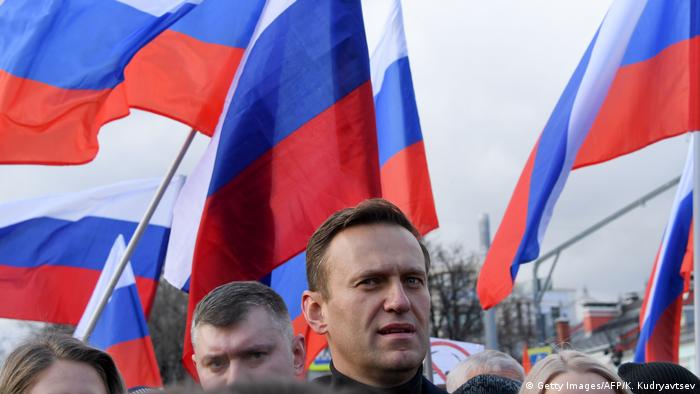 The Russian government said on Wednesday that international calls to find out who is behind the alleged poisoning of opposition figure Alexei Navalny are aimed at rallying support for punishing Moscow.

"Unfounded attacks on Russia are continuing," the ministry said in a statement. These had led to a "whipping up of hysteria" that had "nothing to do with Navalny's health or "finding out the genuine reasons for his hospitalisation."

Reactions from the international community

The comments come a day after foreign ministers from the G7, the group of the world's largest advanced economies, called on Russia to find and prosecute those behind the alleged poisoning.

The Kremlin, meanwhile, summoned German Ambassador Geza Andreas von Geyr on Wednesday and protested against "unfounded accusations and ultimatums against Russia" and the "obvious use of [Navalny's] situation by Berlin as a pretext to discredit our country."

Moscow again urged Berlin to respond to a request from Russian prosecutors for the evidence, including medical data, that led Germany to declare that Navalny had been poisoned with nerve agent Novichok.

Failure to provide the test results will be seen as a "gross hostile provocation" that would be "fraught with consequences for Russian-German relations, as well as a serious complication of the international situation", the ministry said.

But Berlin said it has no intention of delivering the evidence directly to Russia, preferring to hand over the test results to the Organization for the Prohibition of Chemical Weapons (OPCW), the German government's deputy spokeswoman Martina Fietz confirmed.
Germany said last week Navalny had been poisoned with a Novichok nerve agent. He collapsed in Siberia on August 20, flying to Berlin for treatment two days later.

German Foreign Minister Heiko Maas raised the possibility for sanctions against the Russian government unless it failed to explain the circumstance around Navalny's ill health.

Maas, a member of junior coalition partners the Social Democrats, told the Bild Am Sonntag newspaper that Berlin could reconsider a controversial gas pipeline deal with Russia, known as Nord Stream 2.

"I hope that the Russians will not force us to change our position on Nord Stream 2," he was quoted as saying.

The multi-billion-euro project would bring Russian gas directly to Germany under the Baltic Sea as the country moves to phase out nuclear and coal.

Her spokesman on Monday raised for the first time the possibility that her government may be forced into a rethink.

"The German chancellor agrees with the foreign minister's comments from the weekend," the spokesman said.

In Russia, poison's just one of methods used to attack Kremlin critics