Russia's Channel One will not be broadcasting the Eurovision Song Contest this year, the state-owned TV channel has said. They accused the Ukrainian hosts of trying to politicize the show by banning Russia's candidate. 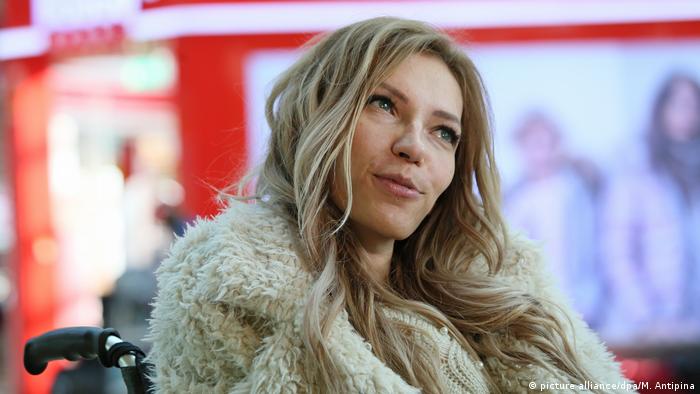 A Russian broadcaster has refused a Eurovision offer for song contest entrant Yulia Samoylova to appear by satellite link in the Ukraine-staged final, calling it "peculiar." The singer had been barred entry to Ukraine. (24.03.2017)

The broadcaster decided to drop the contest after the European Broadcasting Union (EBU) informed them it could not resolve the dispute with Kyiv, Channel One said on Thursday.

Ukraine, the last year's Eurovision winner, is set to host the competition next month. However, the Ukrainian security services have decided to deny entry to the contestant from Russia, the 27-year-old, wheelchair-bound Yulia Samoylova. The reason, according to Kyiv, is that Samoylova toured Crimea after it was annexed by Russia in 2014.

"The Ukrainian authorities did not fall for this provocation," he said.

Aim of 'bringing people together'

The rules of the Eurovision Song Contest ban political gestures, and the organizers said they were "deeply disappointed" by the ban. Ukraine might find itself excluded from future Eurovision events if the ban stays in power, the EBU warned.

"No previous host country has prevented an artist performing at the Eurovision Song Contest and the EBU would like a precedent to be set in 2017," they said in a letter to Kyiv.

Looking for a way around the problem, the EBU suggested to Russia to replace the contender or have Samoylova perform via a satellite link. Channel One considers both those solutions to be "unacceptable."

In its evening bulletin, the state-funded broadcaster described the Ukrainian ban as "groundless."

Kyiv was attempting to "politicize the contest, whose goal, throughout its 62-year history, was to bring people together."

While the glitzy annual event lost some of its relevance in western European countries, many Eastern European states see the competition as an expression of national pride. Last year, Ukraine won the competition with a song about Joseph Stalin's deportation of Crimean Tartars, widely interpreted as a jab against Russia.