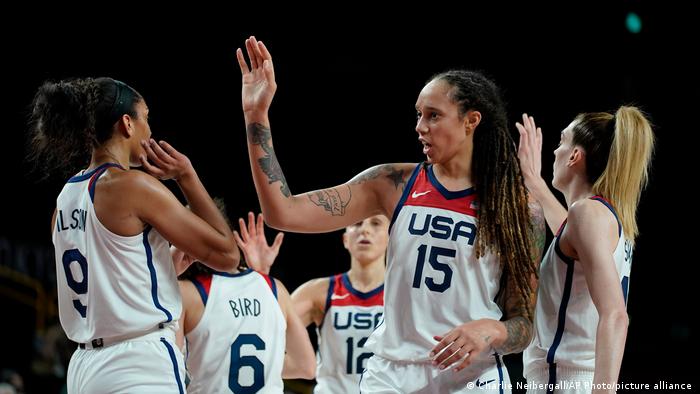 In a video released by the Customs Service and seen by the New York Times, a traveler appearing to be Griner, 31, could be seen having a package removed from a bag as she went through security.

In an accompanying statement, the Customs Service said the traveler was being detained on drug trafficking charges, which can carry a jail sentence of up to 10 years in Russia.

"We love and support Brittney and at this time our main concern is her safety, physical and mental health, and her safe return home."

A WNBA spokesperson told USA Today: "Brittney Griner has the WNBA's full support and our main priority is her swift and safe return to the United States."

USA Basketball said it is closely monitoring Griner's legal situation. "Brittney has always handled herself with the utmost professionalism during her long tenure with USA Basketball and her safety and wellbeing are our primary concerns," the governing body posted on Twitter.

Griner, a seven-time WNBA All-Star and two-time Olympic champion, has been playing for Russian team UMMC Ekaterinburg during the WNBA off-seasons since 2015, and her arrest comes at a time of increasing diplomatic tensions between Russia and the United States over the former's invasion of Ukraine.

"In recent years, Russia has been detaining and sentencing American officials on what United States officials often say are trumped-up charges," wrote the New York Times, speculating: "The arrest of a high-profile American could be seen as Russia attempting to create leverage for a potential prisoner exchange with the American government."