Russia has delivered evidence to the United Nations that Syrian rebels used chemical weapons in a March attack. The country's UN envoy says their report has "established" a sarin gas rocket was fired by rebel forces. 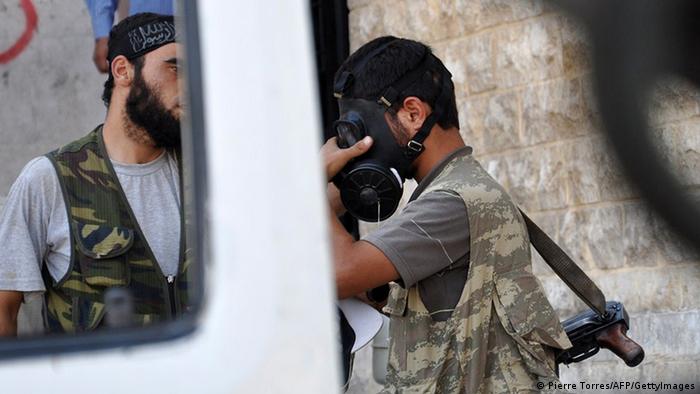 Russia's UN envoy Vitaly Churkin said Tuesday scientific analysis indicates that a deadly projectile that hit a suburb of the Syrian city of Aleppo on March 19 contained the nerve agent sarin. Russian experts traveled to the scene of the incident at Khan al-Assal, which killed more than two dozen people, to gather firsthand evidence.

Churkin said samples taken by investigators at the site of the incident, which were analyzed at a Russian laboratory certified by the Organization for the Prohibition of Chemical Weapons, "established" that rebel forces fired a Basha'ir-3 rocket that hit Khan al-Assal. He added that analysis showed the rocket, which was filled with sarin, was not a military-standard chemical weapon.

"Therefore, there is every reason to believe that it was armed opposition fighters who used the chemical weapons in Khan al-Assal," Churkin told reporters after handing over the 80-page report to UN Secretary-General Ban Ki-moon.

The investigation showed that "the production of Basha'ir-3 unguided projectiles was started in February 2013 by the so-called 'Bash'ir al-Nasr' brigade affiliated with the Free Syrian Army," he said.

The US has used what it says is evidence of the Syrian government's chemical weapons use as grounds to arm rebel fighters. In response to Churkin's comments, Whitehouse spokesman Jay Carney affirmed the position taken by many western nations by saying the US was unaware of evidence linking chemical weapons use to Syrian rebels.

"We have yet to see any evidence that backs up the assertion that anyone besides the Syrian government has the ability to use chemical weapons or has used chemical weapons," he said.

Carney, as well as France's UN Ambassador Gerard Araud, urged Syria to allow UN inspectors into the country. Ban has insisted on "unfettered" access to all areas of alleged chemical weapons attacks, but the Syrian government has said it will only allow UN experts to investigate the Khan al-Assal site.

Syria invited Ake Sellstrom, head of the UN fact-finding mission on chemical weapons use allegations in Syria, and UN disarmament chief Angela Kane to Damascus this week for talks. Churkin expressed his support for the meeting, calling it "a promising process" that would hopefully lead to an investigation.