Russia coach Guus Hiddink is not letting rising speculation over the club future of star attacker Andrei Arshavin distract him from preparing his side for the semi-final clash with Spain on Thursday, June 24. 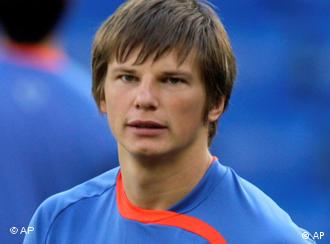 In fact, Hiddink has joined the chorus of voices advocating a move for the talented 27-year old who has taken the tournament by storm since coming back from suspension. The Dutchman believes his playmaker should play in a top European league after Euro 2008.

Arshavin helped Zenit St Petersburg to win the UEFA Cup last season and has excelled against Sweden and the Netherlands after missing the first two games of the tournament through suspension.

All but one of the 23-man Russia squad play their club football in Russia, but Hiddink said Monday: "I think some players can survive and make a contribution to the big leagues in Europe."

Arshavin, who was majestic in Russia's 3-1 extra-time defeat of the Netherlands in Saturday's quarter-final, has attracted the biggest plaudits and is reported by Dick Advocaat, his Dutch coach at Zenit, to be keen on a move to a big club. 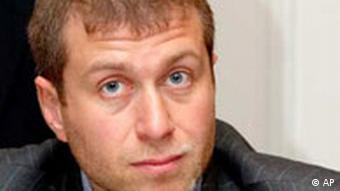 Reports say Barcelona and Arsenal are in the running for the star while Chelsea's Russian owner Roman Abramovich has reputedly told new coach Luiz Felipe Scolari to hold fire on buying Portuguese star Deco as he sanctions a possible move for his compatriot.

"Of course, the role models are good for Russian football also, but nowadays the world of soccer and information is so open," Hiddink said. "It is also good for him, maybe not for his club, to go and try to make a step to a big, big league, which is nice to see."

Hiddink said he selected him for the Euro 2008 squad, despite Arshavin being suspended for the first two group matches, because he knew he could make a difference.

"An average player in the same circumstances, having a two-game suspension, I wouldn't have selected him, but we knew he has some extra quality, and we hoped to be still in charge (of our destiny) in the Sweden game and that's why I selected him." 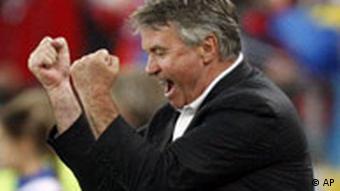 Hiddink knows his star is ready to take a step up

Shown a photograph of Arshavin celebrating after scoring one of Russia's two extra-time goals against the Dutch, Hiddink said: "He is showing the world he can do it and we can do it.

"He is not a selfish player. He can go into the defense with the ball at his feet. He is very accessible and very good to work with," the Dutch coach added. "All the big players are special, and I love to work with these special players because deep inside they like to play, but they like to win as well."

Arshavin refused to speak to the media attending Russia's training session at Rankhof Stadium in Basle, and waiting journalists were told by an official that the player does not give interviews.

However, before the session he told reporters that he would prefer a move to Spain.

"I know that I have offers from England and Germany, but what I really want is to play in the Primera Liga," he said. "It's the championship that I have always followed, I like how soccer is played there. But for now, I have no offers from Spain."

Hiddink meanwhile has fitness concerns on striker Ivan Saenko, midfielder Diniyar Bilyaletdinov and defender Aleksander Anyukov, who are all nursing ankle injuries, ahead of Thursday's semi-final against Spain in Vienna. 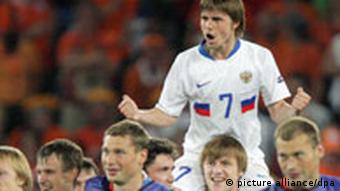 Torbinski (No. 7) is suspended for the semi-final

Two players are suspended: central defender Denis Kolodin, who impressed against the Dutch with three thunderous long-range shots, and midfielder Dmitri Torbinski, who came on as a substitute.

Hiddink said that Torbinskiy was an important player who knew how to accelerate a game, while the loss of Kolodin was a major setback.

"He is difficult to replace because he is having an excellent tournament. He may not be getting a lot of media attention, but defensively he is doing a tremendous job," Hiddink said. "I have just 12 players who can play. Yes, I have 23, but there are three, four rookies who are getting the experience of a tournament. Their eyes are wide open, so I can use just 12 to 13 players. There won't be many changes."

Russia will have to avenge a 4-1 defeat to Spain in their opening Group D game if they want to advance to Sunday's final in Vienna. 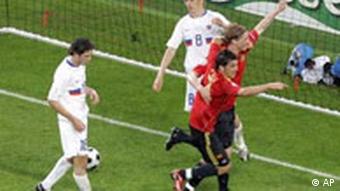 Hiddink said that Spain "like to play like we like to play." He dismissed the idea that his players, whose fitness appeared to be a factor in the defeat of the Dutch, might be physically stronger because the Russian season had only recently started.

"I don't think we are fitter when I see the Spanish team play. It is not just fitness that will determine it," he said.

Spain, moreover, had the advantage of having players that had been together for a longer time, Hiddink said.

"Besides, they are playing in a league which is very strong, whether it is the English or Spanish, plus they play Champions League in between, which gives them a lot of potential," he said.

"Our players don't have that, but I hope I will be surprised."

Semi-Finals Pit Disparate Coaches Against Each Other

The coaches of Germany, Turkey, Russia and Spain all have their eyes on the one prize. How one goes about achieving the aim of becoming European champion will depend on the approach of all the others. (24.06.2008)

Spain edged their way into the semi-finals of Euro 2008 with a 4-2 penalty shoot-out win Sunday over world champions Italy following a tense game that finished goalless after extra time in Vienna. (23.06.2008)

Dutchman Guus Hiddink led his young Russian team to a memorable 3-1 win in Basel on Saturday over his Dutch compatriots -- and into the semi-finals of Euro 2008. (22.06.2008)

Russia came through when it most mattered on Wednesday, June 18, beating Sweden to reach the quarter-finals of Euro 2008. It was a remarkable turnaround for a team who looked lost as Group D neared its conclusion. (19.06.2008)

Follow the action from a different perspective with Alpine Kicks.