The Russian foreign minister has said the government in Kyiv is planning a new offensive in its conflict with pro-Moscow separtists, flouting the ceasefire. Germany has also warned that the situation is "explosive." 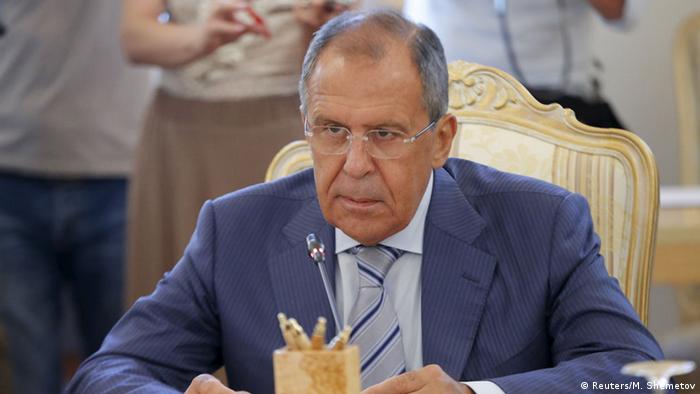 Russia's top diplomat Sergei Lavrov accused Kyiv on Monday of planning a new offensive against rebels in Ukraine's restive east and "trying to heat up tensions by making some unbelievable and crazy statements."

"We are worried by the developments in recent days which strongly recall preparation for more military actions," Reuters news agency reported Lavrov as saying, strongly placing the blame for renewed violence on the Ukrainian government. "It was like that in August last year when Ukrainian soldiers received the order to attack. ... It was like that in January of this year. One shouldn't be experimenting and trying one's luck, one should simply fulfill what was agreed in Minsk."

Lavrov's comments came as clashes broke out near the port city of Mariupol and the rebel-held town of Horlivka, near the pro-Russian separatist stronghold of Donetsk. Both sides conceded that at least seven civilians were killed amongst the fighting, along with two Ukrainian soldiers, according to government sources.

While both sides have pulled back their heavy artillery and tanks, sporadic flares of violence have continued since the second Minsk conference in February resulted in a ceasefire agreement. In a newspaper interview published over the weekend, Germany's Foreign Minister Frank-Walter Steinmeier called the situation "explosive" and urged both sides to prevent it from spiraling out of control.

More than 6,500 people have been killed in the conflict since it erupted in April 2014 after Russia annexed the Crimea region in reaction to the ouster of the Moscow-backed former President Viktor Yanukovych.

Russia has extended the list of countries under a food import embargo to include Iceland, Montenegro, Albania and Liechtenstein. Prime Minister Dmitry Medvedev said that Ukraine too might soon be added to the list. (13.08.2015)

The team reviewing the cause of the fatal crash of MH17 has said they have discovered what may be parts of an anti-aircraft missile near the site. Ukraine and pro-Russian rebels have blamed each other for the incident. (11.08.2015)