Following a meeting with John Kerry, Russia's foreign minister said Moscow would go ahead with Syria peace talks. The US top diplomat met with Putin as well, in an effort to bridge differences between the two countries. 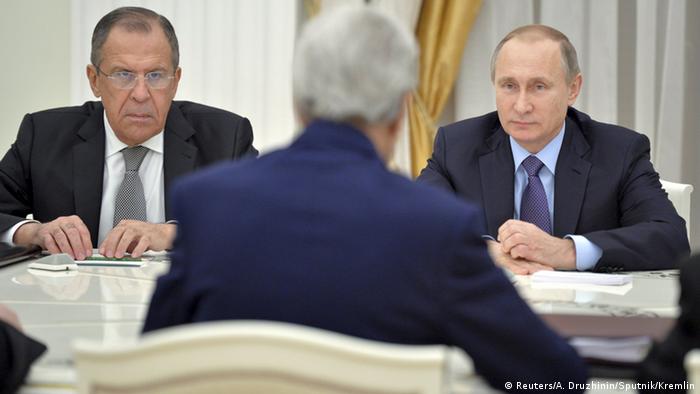 The US and Russia agreed to go forward with planned peace talks in New York concerning the conflict in Syria, following a meeting between Secretary of State John Kerry and President Vladimir Putin in Moscow.

Syria seemed to dominate the talks during Kerry's visit to the Russian capital on Tuesday. The two countries are both seeking an end to the conflict but disagree over the fate of President Bashar al-Assad, whom Moscow supports but Washington wants to see removed.

Furthermore, Kerry wanted to address concerns over Russian airstrikes in the country, which Washington and other Western governments claim are targeting the "moderate" rebels trying to oust Assad. Moscow has vehemently denied these claims, insisting it's targeting terrorists such as the so-called "Islamic State" (IS) extremist group.

The secretary of state arrived in Russia without knowing if peace talks would go ahead as planned in New York on Friday. But Lavrov, after his meeting with Kerry, announced on Tuesday the meeting of the International Syria Support Group would indeed take place.

Afterward, Kerry met with Putin to further discuss the most pressing issues in the US-Russia relationship. DW's Moscow correspondent, Emma Burrows, reported that "substantial negotiations" had taken place, and that Kerry was confident that the two countries could work together in a positive way.

It wasn't all work for Kerry, either; the diplomat reportedly shopped in Moscow before leaving.

The meeting comes as tensions between the West and Russia have begun to soften a bit, as leaders push for cooperation in the wake of multiple terrorist attacks - including one that brought down a plane full of mostly Russian passengers in Egypt - and which they attribute to IS.

Kerry in Moscow to bridge differences over Syria

US Secretary of State John Kerry has arrived in Moscow for a critical meeting to keep momentum going on Syria peace talks. A number of tough issues are on the agenda. (15.12.2015)

Assad says he won't step down, won't negotiate with 'terrorists'

Syrian President Bashar al-Assad has said he would not negotiate with "terrorists." The comments come a day after a divided opposition coalesced around a unified position ahead of potential talks with the regime. (11.12.2015)

Syria, the coalition and the compromise

US officials are optimistic: Syria's civil war can be resolved in the foreseeable future. This can only be reached in talks with moderate groups in the country. But a great challenge still remains. (07.12.2015)