Several officials have said that Russia did not target the militant group "Islamic State," but instead moderate Syrian rebels. The UK, France and US have demanded proof of Russia's targets. 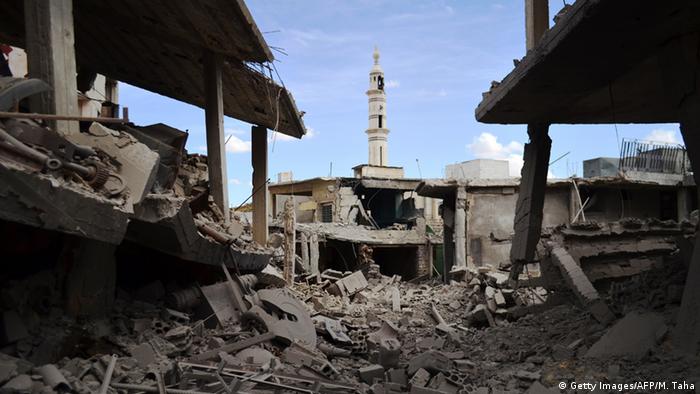 "It's very important that Russia is able to confirm…that the military action it has undertaken in Syria this morning is directed at ISIL ("Islamic State") and al-Qaeda affiliated targets only and not at moderate opponents of the Assad regime," Hammond told the Security Council.

"Actions in support of the [Assad] regime are incompatible with the effective prosecution of the war against ISIL in Syria," Hammond said.

The British Foreign Minister's statement comes amid reports from Syrian rebels, US and French officials that the Russian airstrikes apparently did not hit "Islamic State" or al-Qaeda-affiliated al-Nusra Front targets.

No future with Assad

"We must not and will not be confused in our fight against ISIL with support for Assad," Kerry noted.

"ISIL itself cannot be defeated as long as Bashar al-Assad remains president of Syria," Kerry said.

Meanwhile, French Foreign Minister Laurent Fabius said that if Russia's airstrikes targeted moderate Syrian rebels, then it would prevent France from collaborating with Moscow, adding that French authorities were in the process of verifying the targets of the airstrikes.

Fabius also called on Syrian forces to end "indiscriminate bombings" of civilian populations, and signaled that al-Assad had no place in Syria's future.

"The fate of the Syrian people cannot be limited to a horror scenario where they must choose between a criminal regime or barbaric terrorism," Fabius said.

Only intel in Iraq

Meanwhile, Kremlin spokesman Dmitry Peskov said on Wednesday that Russia's airstrikes would not extend to Iraq, and that it would not use Iraqi airspace to carryout strikes in Syria since the government had not requested such support.

The office of Iraqi Prime Minister Haider al-Abadi posted on his Facebook that a recent intelligence sharing agreement between Iraq, Russia, Syria and Iran did not include military coordination.

"The Iraqi government emphasizes that the establishment of a cell in Baghdad with Russia, Syria and Iran is solely to share information on Daesh ["Islamic State"] in order to help Iraqi forces defeat the terrorist organization and protect the people of Iraq," al-Abadi said.

"Iraq has not agreed to establish a military coordination cell with the said countries and any claim to the contrary is false," al-Abadi added.